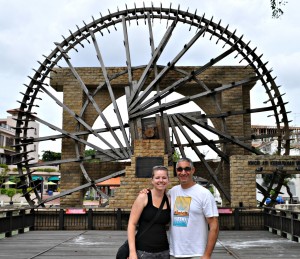 Jill and me at the Sultanate’s Water Wheel in Malaysia.

Something I’ve been pondering lately is the meaning of freedom.

For me it is more ambiguous.

It is more a way of life and a way of thinking that allows me to have freedom.

The way I ended up coming to China is a perfect example.

As is my relationship with Jill.

As is my desire to be a minimalist in almost everything I do.

As is my way of being a therapist.

I attempt to be as efficient as possible.

Life is too short, in my humble opinion, not to be efficient and not to enjoy it.

That is how I define freedom.

I left my job in California with only a plan to travel the world.

I wanted to start in Mexico, then go south.

I’d jump over to Cuba, since I love Cuban culture, dancing and music.

Then I’m go over to Europe to see my friend, Isabel Oller in Spain, and visit other places and people.

Lastly, I was going to head over to Asia.

Since my brother lives in China, he knew some people and he thought I should send over my resume.

I was hired to come to Beijing and be a therapist at the most amazing company I’ve ever worked for at this point.

I also was waiting for the San Francisco Carnaval Parade 8 days before I left to see friends, salsa dance, and say goodbye to “mi familia” there.

I ran into the woman that would become my girlfriend, Jill Loeffler, and we spent the next 8 days together and she saw me off at the airport.

1.5 months later she arrived and we haven’t been apart for a day yet.

She had the freedom to do this because she quit her high-paying, and incredibly stressful job, about 3 years ago and has traveled and started her own websites.

She lived in Airbnb apartments for the past 2.5 years because she didn’t want to be tied down to a rental agreement and stuck in one place.

Some of these were with me and most were on her own.

She moved to China and we’ve since traveled to Malaysia and Singapore.

We plan to do a train ride across the Silk Road and into Turkey this summer.

A very important ideal in my way of doing Behavioral Therapy is that regrets really aren’t useful in most cases.

They can be if they allow you to be more productive and keep you moving forward but I’ve found that the same results can usually be achieved from a much more positive outlook where cognitive distortions and negative self talk are minimized and questioned.

We both think in the same manner, although Jill has never done therapy, while I needed Behavioral Therapy to figure out my self.  I have helped Jill with some negative thoughts using a daily mood log and she figured it out as quickly as anyone I’ve ever met.  She lives in the present and doesn’t rely on the past to make her decisions for her.

Because of our choices in life we have both found jobs, or made them ourselves, that allow us to live this style of life.

We chose not to have kids.

We chose not to have property.

We chose not to be tied down.

We chose not to live in the past or with regrets.

We chose not to worry about events we can’t control.

We chose not to worry about what most other people do.

We chose to live our lives, while treading softly on the Earth, as best we can.

We chose to live as examples of how two people can live, love and bring happiness to others that want to come along for the ride.

He noticed her and asked her to come over so Jeri took the camera and continued taking pictures.

As you can see, he thought Jill was not only beautiful, but “very, very, very beautiful.”

As we finished up, I kept smiling and laughing and being amazed at how my life has turned out and that I have the ability to be in China, with an artist painting my name, face and also Jill’s name in Chinese and how I never would have thought I’d be anywhere near China in my life.

As we finished, I attempted to give him some money as a tip as I want to support local artists and buskers but he refused.  I had to keep handing it to him for about 30 seconds before he would take it.  I hope I didn’t offend him or diminish his artistic style by giving him money.  I just felt it was the right thing to do and he had more than earned anything I could give him in exchange for this amazing memory. 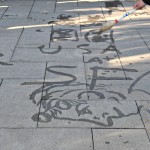 Almost finished with the profile. 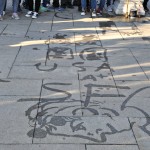 The two black dots on top of my head are my sunglasses. 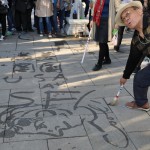 Adding the finishing touches with a bit of English below the profile. 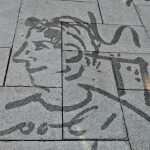 He is right, this is cool! 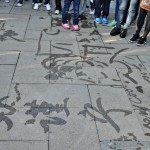 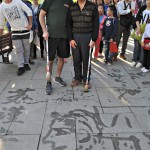 The artist and me. He was nice enough to let me hold a brush. 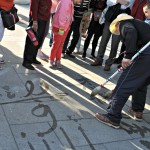 He noticed Jill and spelled out her name in Chinese. 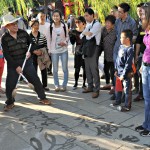 I love the connection between the artist and Jill. Pure joy! 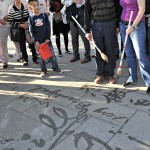 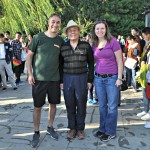 All three of us in the middle of the art. Smiles for miles!

Who needs their name in lights when you can have it in water?

I’m very content with this magical event and beautiful rendering of my name, my face, and of Jill.

My friend from my hometown of Healdsburg, Jeri Jones, came to visit us during the Autumn vacation week in early October.  We did all kinds of touristy things and had a blast.

As we were walking around Beihai Lake, I happened to notice this older gentleman painting pictures with massive brushes.

His medium?  Water on rock.

I instantly fell in love with his art and his wonderful way of moving as he painted.

It looked, to me, as if he was dancing or doing tai chi as he painted and there was such joy that I couldn’t resist getting closer.

As he saw me get ready to take some pictures, he spoke to me in English.

He asked me my name and then started painting away.

He smiled constantly and laughed often at our limited conversations and what he was painting on the ground.

I stood transfixed, like a child, and I can only imagine how large my eyes were as he kept painting, moving, and dancing around the ground.

The painting took up around 20 feet by 20 feet and there was a crowd that kept laughing and encouraging him to paint more and keep going. 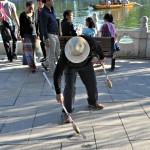 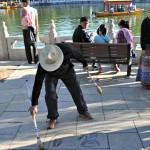 Starting to come to life. 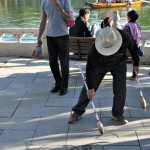 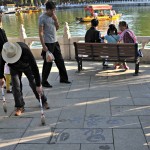 It is starting to come together. 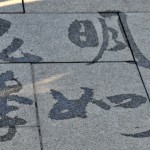 “Kunming Si ji ru chun” which translates to “All 4 seasons just like spring.” 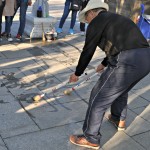 Working on the next section. 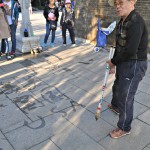 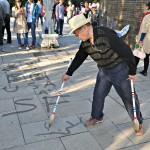 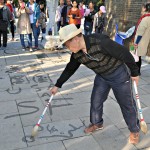 Continuing my profile and adding something above my head. 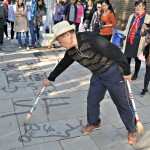 Continuation of my profile.