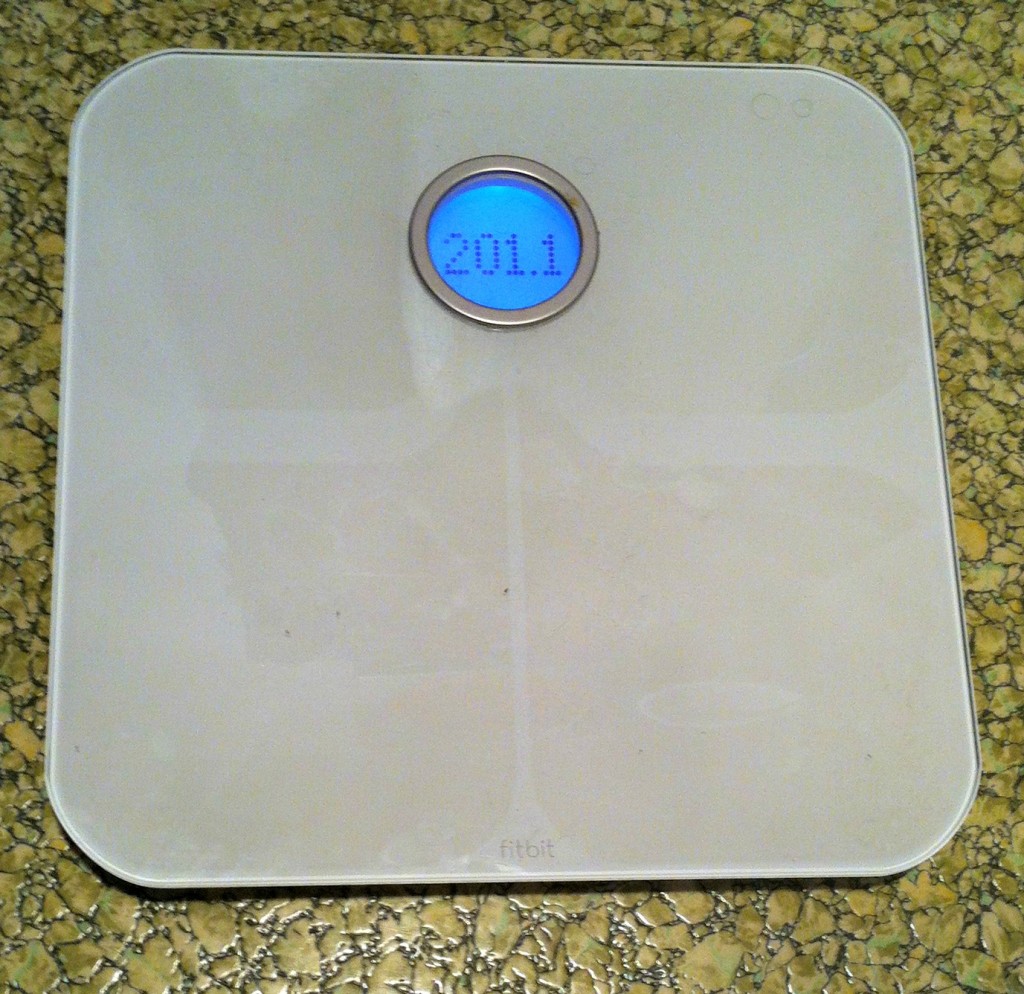 Jill is in much better shape than I am right now.

She tends to keep the weight off and lose it more quickly than I do.

This is partially because I eat too much and partially just body type.

My dad has a belly and my brothers seem to have the same body type that holds that fat if we don’t eat healthy, exercise and take care of ourselves.

It is what we are born with but it is not an excuse.

It is a motivation.

That is how Jill and I see life: You can either use what you are given as an excuse to fail or as a reason to try harder and succeed.

Think about this: Jill has run a website, about travel and tourism in San Francisco, for the last 1.5 years in Beijing, China.

There is a reason she’s succeeded in this endeavor: She did a massive amount of groundwork before she came over.  She took so many pictures, visited so many places, and talked to so many people that she had a huge collection of information to keep building her site and her business while not being anywhere near it.  That takes skill and dedication.

Then, even with the daunting task of dealing with China’s “Great Firewall”, she continued to work and not give up, so that when we finally would come home, she could build the business into exactly what she wanted and make it possible for us to succeed and prosper.

We are building our second site, right now, and are looking forward to sharing that with everyone by the end of January.  I will also be selling my first ebook on it and we think it will be a fantastic new beginning for us as we continue to build the SF Tourism Tips site at the same time.

That is where exercise and Just Run… comes in for both of us.

Just Run… is a group that my friend, Bonnie Vasquez, put together for people that are inclined to get in shape and start running again.  She just decided she wanted to make a change and did it.  No excuses, no waiting until tomorrow and no other reasons needed.  Her choice.  Her change.

It isn’t for hard core runners, although they are welcome, it is just a group for us average folk trying to do a half marathon in the next few months and lose that extra weight, gain that extra confidence, and build a better mind and body.

Jill and I went for our first run a few days ago and I did 2.65 miles and she did about 2 miles.  She had a lot of lower body issues and so she took her time and rested so that she doesn’t injure herself.  I walked a block or two with her, in the middle of the run, and then took off by myself to finish it.

I felt great, other than a stitch in my side, but that is probably because I’m so out of shape and haven’t been drinking enough water.  So, when I got home, I drank a bunch of water and had a very healthy salad for dinner.  Jill and I made it together and it was a wonderful way to start a new year and start being the new people Jill and I want to be in 2015.

Keep building your dream, working hard, and it will happen.  One never knows the path to a dream but it will be paved by you.

In case you are wondering what the 12 week week half marathon plan is, and want to join along, I’ve posted it as a picture here:

Our workout plan for half marathon within 12 weeks.

Yep, it is that time of year again:  My birthday.

It has been an incredible ride.

This last year has probably been my favorite year of my life.

Actually, I’m sure it has been.

And it just keeps getting better and better.

A year ago I had just quit my job at Family Service Agency of San Francisco/PREP Alameda County, where I had worked for almost 6 years.  I originally worked for them in San Francisco as a social worker for geriatric clients who were on medicare and/or medical.  I was enjoying the San Francisco Rueda Festival as a semi-goodbye to my previous life.

I moved over to PREP Alameda County for the last 5 months of employment with Family Service Agency and worked with 18-24 year old people that were recently diagnosed with delusional disorder, schizoaffective disorder or schizophrenia.

I learned so much at both those jobs but had decided to take a break and travel around the world for a year.

Little did I know, that when I put this plan into place, I’d end up in China.

My brother Robert has lived in China for the past 7 years.  He knew I was taking a break and wanted me to come visit.  He also heard that there was a job opening for a therapist at an international company here in Beijing.

After he told me about it, I sent in my resume.

A few weeks later, I was asked to do a skype interview and was hired on the spot.

My plans to travel around the world, learn Spanish, visit Cuba and then go to Europe and finally see my brother in China were flipped upside down!

I actually did go to Mexico, to visit my cousin Michelle and her wonderful husband, John, for 2 weeks before the preparation to move to China happened.

I then spent the next few months dealing with passport and visa issues, saying goodbye to friends and family, and just soaking up the San Francisco Bay Area and everything it has to offer.

And, 8 days before I came to China, the San Francisco Carnaval was happening and I realized this would be my last chance to dance with some of my dear friends and experience the pleasure of salsa dancing and mi familia.

I arrived at the San Francisco Carnaval parade early and, since it was quite empty, I left to grab some food.  An attractive woman was sitting where I had been sitting so I asked if I could sit by her.  She agreed.  We talked for an hour or two before my other friend, Jon-David, showed up.

The three of us spent the rest of the day together, drinking good beer, eating good food, and talking.

I found out that she has a website that is dedicated to all things San Francisco and has done an amazing job building it.  This is a link for the 2014 Carnaval parade but she has over 400 pages of things to do in San Francisco.

It would be a present to her, and me, if you would click this highlighted link and “like” her San Francisco Tourism Tips page on Facebook or just subscribe by email on that page.

Trust me, you won’t regret it!

Anyway, around 10 hours later, I asked her out on a date for the next day.

Jill and I then spent the next 8 days together and she took me to the airport to see me off.

1.5 months later, she arrived in Beijing and has been here ever since.

My life, in pretty much every way, is perfect.

So, to celebrate, I recently decided to start working out and try to get in better shape.

About three weeks ago I started doing push ups.

Here is my attempt: 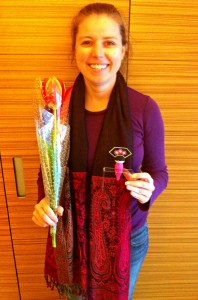 The lovely Jill with her presents.

So, if you read my previous post, you know that I hadn’t actually given Jill her presents by the time it was written.

Here is the end result of our first Valentine’s Day in China.

I bought Jill a flower, a teflon wine bottle stopper in the shape of a Chinese woman, and a handwoven scarf.

She really liked them and seemed to be quite happy.

However, the gift she really liked was when I gave her two free tickets to the GUN SHOW! 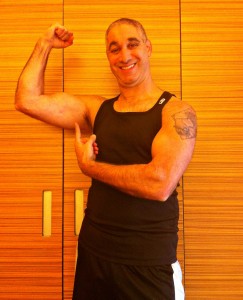 Step right up and redeem your tickets to the GUN SHOW!

This is meant sarcastically but since I’m turning 45 in about 5 days, I decided to get into shape and I’m hoping to do 45 straight pushups next week after only being able to do 15 just 2 weeks ago.

Simply stated, Jill inspires me to be a better person just by being the person she is each moment.

I wish everyone reading this the same type of relationship I have with her.

Don’t give up until you want.  Even if it takes 45 years.

You may not realize it yet, but, you are worth it.