So, Jill and I decided to go to the Beijing Octoberfest.

It was, in the most perfect way, absurd and wonderful.

We met up with our new friend, Federica, and her friends.  We had a group of about 8 people.  This would allow us to have a table to ourselves and also the special deal for beer and food.

As we entered we noticed 4 huge tents.  Actually, according to the website, Beijing has the largest Octoberfest tent in the world as it seats 15,000 people.  The other ones are only slightly smaller and hold 12,000 people each.

Each tent was decorated differently ranging from just a simple white tent with a sign on it to a wooden exterior then, to my favorite, the red and gold tent.

We walked into the first tent because a few of our other friends were already there and were ushered to our table.  It was a nice picnic table with benches on each side.  We were about 100 feet from the concert stage and in close proximity to bathrooms, which are always a necessity when drinking copious amounts of beer.

You might have noticed that I mentioned a concert stage above.  Yes, each tent had a concert stage.  As we ordered our food and drinks, the stage started to fill up with performers.

The first band to play was a German band that played mostly American rock ‘n roll songs.  They did play some German drinking songs once in a while but mostly stuck to rocking out and this was a blast.

The way I knew they were German drinking songs, since I don’t speak German, is every single German, and specifically the table of Germans beside us, would stand up, start singing and then drink a huge amount of beer when they ended the song.

We ended up become close friends to the group beside us during the day. 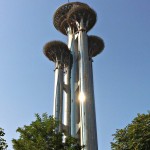 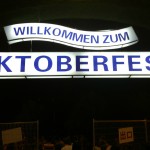 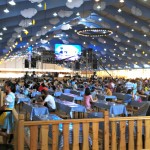 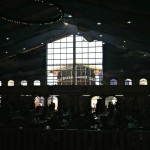 The tent across the street. 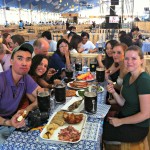 Our table with friends! 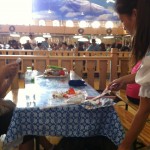 Notice the squeegee she is using to clean. 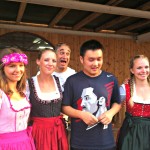 Me photobombing some guy’s shot. 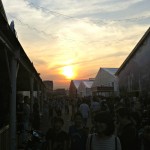 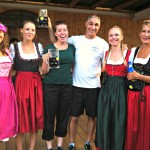 Jill and me doing it right! 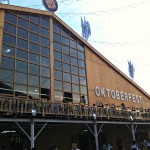 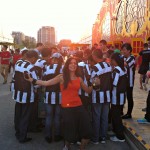 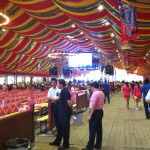 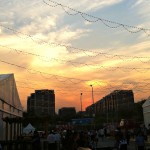 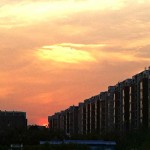 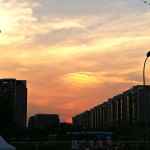