I was walking to the store yesterday and noticed this rather, um, how shall I say, interesting choice of pothole cover.

Well, not as much cover as growth.

I stood there for a few minutes, in a bit of awe and amazement, thinking that this pothole was either stolen, moved, or lost, and someone thought this was the best way to make sure people don’t fall into the hole.

This is a very busy street with lots of cars, trucks, buses, motorcycles, and people on bicycles driving on it.

This wasn’t here last night so, sometime during the night, this manhole was taken and replaced with this branch.

A lot of people in Beijing seem to ride their bikes and motorcycles with headlights without their headlights turned on.  Honestly, I’ve almost been run over by cyclists and scooter/motorcyclists that don’t use their lights at night.  It is very dangerous and I would hate to think of what might have happened in between the time the manhole cover was removed and the branch substituted for it.

Hopefully no one was hurt and they will have a new manhole cover in a day or two. 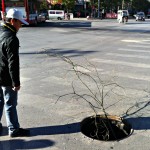 Watching the reactions of people to the branch was priceless. 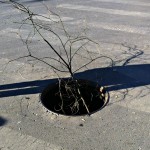 I have a feeling this tree isn’t growing in this hole. 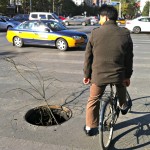 Nothing new in Beijing. Just a manhole cover with a tree coming out of it.