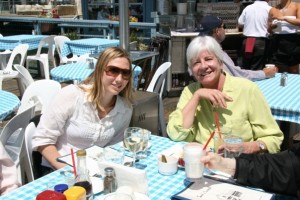 Hannah and Marjorie at Sam’s in Tiburon

Marjorie Kewley was my coworker.

Marjorie Kewley was my supervisor.

Marjorie Kewley was my friend.

Marjorie Kewley has passed from the world.

I write this to honor the person that was Marjorie Kewley.

She died 2 days ago and she passing makes the universe just a bit more dim.

I worked with Marjorie for 5 years at Family Service Agency in San Francisco.

We worked as social workers in the geriatric division in the Richmond District of San Francisco.

Our clients were the poorest of the poor.

All were over age 60 and medicare, medical or no insurance at all.

Many didn’t have families anymore or anyone else to take care of them.

We became their family.

Marjorie did this for 17 years was an inspiration to me and to everyone in our office.

She had more empathy than anyone I have ever met and yet was never afraid to speak truth to power.  This has become a trite and overused term but it was the heart of everything Marjorie stood for and believed in. 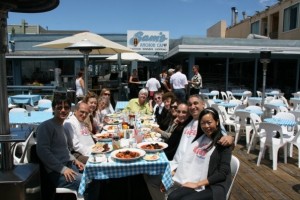 The Family Service Agency gang at Sam’s of Tiburon. Marjorie was, and will forever be, at the head of the table.

I can not think of how many people she helped, realities she changed and people she saved during her time on this Earth.

I can honestly state that I would not be the therapist I am today, nor the person I am today, if I had not met Marjorie and learned from her.

I remember one particular time, about two weeks before she retired, where she called me out.  She gave me a ride home from a seminar at work and said, “I think your ideas are fine about therapy, I just don’t like that you are so dogmatic about it.”

I looked at her, laughed because she was so honest and upfront, and said, “You are right.  I am dogmatic.  But it what I believe works best and evidence proves it.”

She looked back at me, smiled and said, “Yeah, well I still don’t like it.”

We both smiled, laughed and gave each other a hug because we were more alike than different.  We could disagree and were able to let it go immediately because we both knew we were fighting for the same common good and for the people that others didn’t seem to care about or want to be around most of the time.

She battled cancer twice and this time the cancer won.

I can’t believe it as she is someone that I thought would live forever, and the twinkle in her eye and slightly sideways smile-smirk that shows she knows a little more than you can guess she does, will always be with me.

I wish everyone has a person like Marjorie in their life at some point.