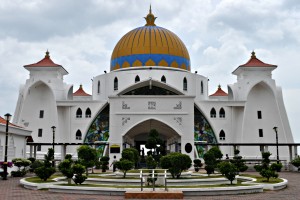 Jill and I had read about an amazing mosque in Melaka that was built over the Melaka straits and we knew we wanted to visit it before we left.

We’d been running around, a lot, on this trip and hadn’t had much down time and we were thinking of skipping it.

The pool at our airbnb apartment was nice and relaxing and the weather was hot and humid.

We looked at the pros and cons of skipping the Masjid Selat Melaka and decided that we’d probably regret not going and we could sit in the pool on another day.

We are both so glad that we decided to visit that Masjid Selat Melaka.

If I only had one word to describe it, it would be, “beautiful.”

I’ve seen some of beautiful architectural sites of the world including Big Ben, The London Bridge (and it wasn’t falling down, by the way), The Golden Gate Bridge, and The Sydney Opera House, The Blue Mosque and Hagia Sophia in Istanbul.

I’d have to say it was equal to some of those because it was so simple and yet so perfect.  There wasn’t a wasted piece of space and there was a large amount of open space that allowed the mosque to feel fresh and peaceful.

We both loved the sounds of the water crashing below it and the waves moving slowly by us as we stood out on the deck that surrounds the masjid.

The people were incredibly friendly and, as we stopped at the entrance and looked around, a gentleman walked up and asked, “Would you like to go inside?”  We responded we would and he told us that Jill would need to wear the hijab and I would have to pull my shorts down to cover my knees.

Jill went to put it on and a few women helped her with it since it is quite tricky.  She told them, “I respect anyone that is wearing this because it is so hot!”  The women nodded and smiled.

The hijab that Jill wore was made of nylon and didn’t seem to allow the body to breathe much at all.  These seemed to be used to at the mosques because so many people, and especially tourists, borrow them and they would wear out very quickly if they were made of a softer material.

I wore one later on our trip and I felt the same way. as Jill.  This was especially evident when I pulled the hood over my head to see what it would feel like to cover up as many women in Malaysia do.

Most of the women we saw on our every day travels wore very light hijabs that seemed to allow for the body to breathe more and didn’t seem to be uncomfortable.  I have no idea about the burqa because I didn’t speak to anyone wearing those on my travels so far.

After being fitted, the man walked Jill back to me and took a picture of us together.  It is actually one of my favorite pictures of our travels because we are in front of a gorgeous mosque, over the water, in a beautiful country and we are learning about Malaysia, Islamic customs and doing our best to fit in and also express who we are as individuals.

I was a little worried about wearing a Bear Republic Brewery t-shirt into the mosque since drinking alcohol is forbidden in the Islamic religion but no one seemed to mind and it is  fun to wear a shirt from my hometown while traveling to far and distant lands.

As we walked around the mosque, people would smile and greet us kindly.  They often wait for us to take our pictures and we did our best not to interfere with anyone who was praying or trying to take pictures of their own.