Jill and I have been told about the awesomeness of Chinese New Year fireworks for a few months.

We weren’t sure if we’d stay in Beijing, or China, for it as it is a massive festival and most businesses shut down.  Also, if one wants to travel around China, there are about 200,000,000 people traveling back to their homes and the trains are jammed packed and quite chaotic.

Speaking of travel in China during Chinese New Year, Jill and I watched a brilliant documentary on this migration titled, “Last Train Home.”  I would recommend it to anyone that wants to have a better understanding of what an average Chinese worker goes through to survive in today’s world.  It is very powerful and moving.

We were told of a rooftop party at a restaurant near Houhai Lake.  This is a beautiful area and I have a blog coming out, in a few days, when we went to watch people ice skate on the lake.

Luckily it is a quick subway and then bus ride to get there and we planned on grabbing a taxi home since all the buses shut down around 11 pm.  One of the joys of Chinese New Year in Beijing is that almost everyone else has gone home so the subways and buses are almost empty.  It has never been so easy to get a seat as it has been in the past day or two.

Amazingly, it wasn’t that cold and we were able to walk around in just our jackets and didn’t even need our hats or gloves for most of the night.

We arrived at The Orchid and sat down for a few drinks.   It was an all you can eat and drink menu for 300RMB (about 50 USD).

We waited for our friends, Nick, Deven, Nic and Jason and when they showed up we moved upstairs so we could look out the windows and watch as the festivities started.

Another couple arrived and we invited them to sit down with us since they looked like they didn’t have anyone else to celebrate with at this point.

As we talked with our new friends, we found out that he originally Eric was from Half Moon Bay and Kimberly was born in Santa Rosa, California.

For those that don’t know, I’m from Healdsburg, California.  It is a beautiful little town in the middle of the wine country.  Santa Rosa is about 10 miles away and was one of our main rivals in sports and pretty much everything else.

As Jill’s and my world gets bigger, it continues to get smaller.

As midnight approached, we went on the rooftop but it was so packed we had to stand on the stairs.  I was worried about Jill and her knees being in pain and tried to figure out somewhere else to stand and still be able to see the fireworks clearly.

Jill noticed our friends on the top of another roof and we asked if we could come join them and they agreed.  We hung out with them and enjoyed the fireworks for about 30-45 minutes.

We then went back to the party and hung out until around 2 am and were lucky enough to grab a cab almost the second we walked out the door with another friend we met tonight and shared the cab ride home, turned on our air filter to the highest power (it makes a grey noise that blocks out the sounds from the constant fireworks and firecracker explosions) and happily fell asleep after welcoming in the Year of the Horse.

I wishing you all “春节快乐“, which is pronounced “Chunjie Kuile” and means Happy New Year in Mandarin. 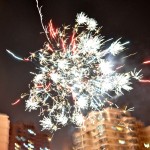 Fireworks by our apartment complex. 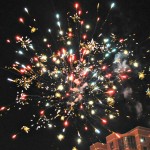 More fireworks by our apartment complex.

Lighting up the sky near our apartment. 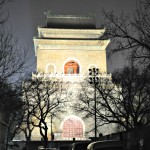 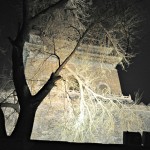 Close up of the Drum Tower. 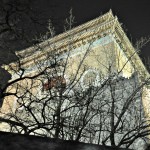 Another shot of the Drum Tower. 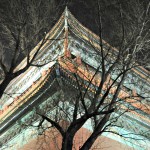 The corner of The Drum Tower. 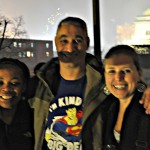 Kimberly, Jill and me on the rooftop. 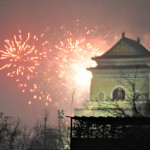 Fireworks by the Drum Tower. 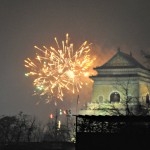 More fireworks by the Drum Tower. 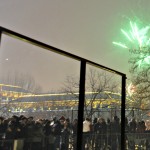 The view facing away from the Drum Tower. 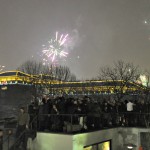 And another shot facing away from the Drum Tower. 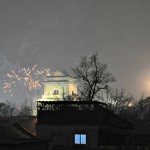 Lighting up the Beijing night sky. 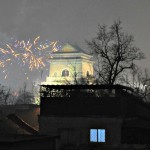 This is after about 45 minutes. 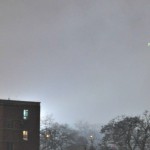 A wide view of the Beijing sky. 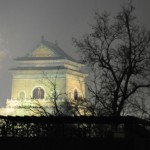 The fireworks were so bright we didn’t need lights to walk around Beijing. 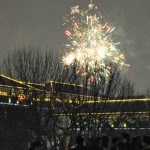 Saying goodbye to the Year of the Snake. 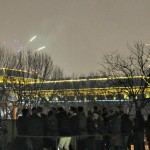 And welcome to the Year of the Horse! 春节快乐!