Our friends and us at Houhai Lake.

Jill, our Italian friend Federica, our buddy Mike from Baaaahhhstaan, and a few others decided we wanted to check out Houhai Lake and watching the first annual ice hockey on Houhai Lake tournament.

We arrived around noon and went to lunch and then started walking around the lake as we searched for the tournament.

Houhai is actually three different lakes and so it is sometimes difficult to find what you are looking for since it is hard to tell which lake people are congregating at.

So, we started at one lake and walked around all three.

We eventually found the hockey tournament at the second lake, but it had just finished, so we went to a restaurant and just hung out and warmed up over some coffee.

That being said, the adventure of watching all these Chinese people enjoying themselves on the ice was more than worth it.

I really enjoyed watching people slide around on the chair-sleds and the smiles on the kids faces as they played around with each other.

We didn’t go skating because we weren’t really dressed for it and we also were a bit worried about how close the ice was to the open water and if the ice would break and someone might fall in.  The weather in Beijing has been incredibly warm and we’ve yet to receive the usual freezing temperatures that make water freeze up enough to skate.

We are hoping that in February we might get some colder temperatures so we can try skating out on the ice ourselves! 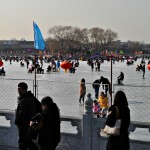 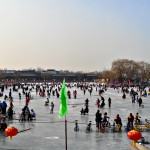 The fence to keep people safe while skating. 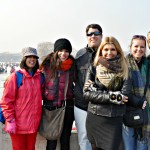 Our friends and us at Houhai Lake. 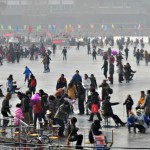 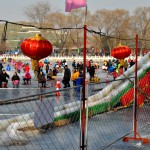 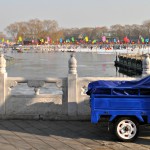 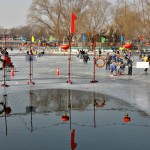 Uh, I’m thinking that is a little too close for comfort. 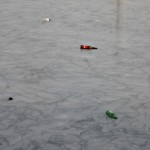 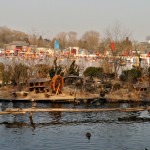 I’m guessing this is pretty cool when it is up and running during the summer.