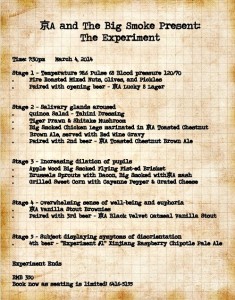 As you have probably noticed, Jill and I are pretty outgoing people.

We have made a lot of friends in Beijing and we are loving our life here.

One of our favorite restaurants is Big Smoke.

Big Smoke is not only an amazing restaurant but it also houses our favorite brewery, Jing A.

The story of how I became friends with this group is a bit long but, I think, quite interesting.

I arrived in Beijing in June.  I was trying to figure out how to make friends and build a community.

I always loved beer, wine and going out so I looked online to see if there was a beer festival anytime soon.

Luckily there was a Beer Geek brewer’s festival that weekend.

I decided to go by myself and make the choice to meet new people and see how it would go.

I met Kris and Alex, who are the head brewers at Jing A, and talked to them and we became friends.

Kris is from Canada and Alex is from the USA.

I also met Eric, who is a writer for the China Daily, and Kat and Mandy, who are (or in the case of Kat, were) editors for the same publication.

About a week later was the Craft Brew Festival for all of China.

I actually met the brewmaster for Boxing Cat Brewery, Michael, who had worked at Pyramid Brewing Company in Berkeley and now lives in Shanghai.  He used to work with my buddies, Dave and Brian, who now own Elevation 66 in El Cerrito and it was my hangout before I moved to China.

I also met Richard Ammerman who ended up being the third part of Jing A Brewing Company.  He was incredibly generous and showed me around, introduced me to new friends, and made me feel incredibly welcomed.  I owe him a lot.

After a month or so, I went to The Big Smoke to try the food and have a bit of Jing A from “their home base.”

I was blown away.  The food was amazing.

I took Jill there for her first meal when she arrived in Beijing.  Nothing like a little home cooking after a 12 hour trip!

I also met the manager, Gordon Kutil, and I knew I was home.

Gordon and I have become incredibly close and we are almost like family.

We joke around, hang out, and have a world view that is extremely like minded.

He is from Tennessee originally but has loves to travel and experience new things.

I later met Che Che, who is from the Philippines and is the matre di.  She wonderful, sweet and always smiling.

At one point, Gordon introduced me to JP, who is the chef and is from Juarez, Mexico.

Finally, I meet Kris, who owns The Big Smoke.  He’s originally from Australia but has lived in China for over 17 years and has owned a few different, and all successful, restaurants.

On top of that, the staff is all Chinese Nationals so there is a huge mix of cultures at one small restaurant.

I love how all these different nations come together to make a community.

So, to make a long story longer, The Big Smoke guys and the Jing A guys decided to do a beer pairing dinner.

It is called the Experiment 1.0 because it was the first one they had done and there, “An experiment.”

My friend, Eric, who writes for China Daily, also came with a friend of his, Mike.  Gordon’s girlfriend, Sarah, showed up with another friend also and we sat with Richard and enjoyed every minute of the dinner.

You can actually see Eric’s wrist, wearing a beaded bracelet, in one of the pictures below.

The food was incredible, and since Gordon and Kris know we are vegetarians, they changed our menu to not have any animal products and we were blown away.

The beers were great and everything was paired perfectly.

All I can write is that this is how a life is made: Great food, Great drink, and most importantly, great family.

Not friends, but family.

Because when you are an expatriate, your friends become your family.

You become very close to them and are also cognizant that they will leave at some point in the future.

The knowledge that this death is imminent makes the family you build even more important than one could imagine.

I’m glad I have my family, all over the world, that allows me to connect to them and they to me.

And, each day, my family grows larger and larger.

I’m thankful you are a part of it also.