Day 295 in Beijing: Home of the Little Green Car! 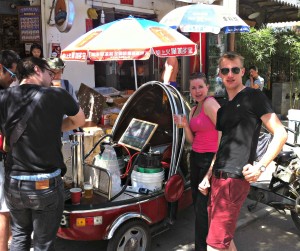 The Jing A Keg Egg. Notice the keg behind the driver’s seat.

Our friends at Jing A brewery have the “Keg Egg” and we’ve seen a few other egg cars around town.

Most are red or blue.

This one was a gorgeous aqua.

As you can see from the first picture, the whole cover pretty much folds into itself.

It can actually be driven with the hood open if one is crazy enough to do it.

I spied this one from our seat on the top of #406 double decker bus as Jill and I were going down to Sanlitun Village.

Santlitun is a major expat area where there are lots of shops, stores, restaurants and bars.

Most of our friends live down there and that is where we usually meet up and hang out.

It is quite lively and a lot of fun.

However, this car was in the more residential area of Beijing.

I have a feeling it is also used as a moving advertisement for a school or something like that since it has all kinds of writing on it. 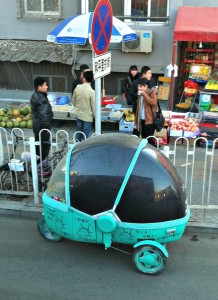 Speaking of schools, pretty much anyone can get hired to work at schools here teaching English.

One is supposed to have been teaching for 2 years but this “teaching” can be giving lectures, marketing to executives, and almost anything else as long as the administration can figure out a way to make your resume sound like it is teaching.

Also, it seems as if the amount they are going to pay you, and your contract, change immensely when you actually show up for the job compared to the want ads.

It is the same with many apartments in that the ad says one thing, and the second you show up, it seems that apartment has been rented, but don’t worry, there is another apartment for rent, in the same building, for about 10-20% more.

Isn’t that an interesting little coincidence?