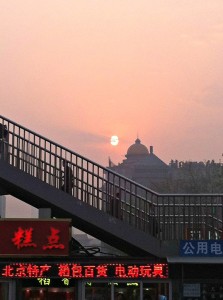 This trip is not really a vacation as much as an escape.

An escape from China, for about 2 hours, so that Jill can meet her tourist visa (L Visa) requirements of leaving China ever 90 days.

It is a bit of a pain because we’d rather leave during holidays and use our work time/play time more efficiently, but that is what happens when you live an expatriate life.  We choose to live in China so we choose to live by their rules.

So, we headed off to the Beijing Railway Station and out of our house at 6 am.

We got to the subway, which was actually somewhat busy for that time of the day, and boarded.

We had one wheel on piece of luggage and one backpack.

We brought along our computers to do work on the train and also to watch some movies in case we were bored with the scenery.

The subway zoomed along and we made one transfer and arrived at the station with an hour or so to spare.

Sometimes the train stations can be a horrific mess of people and confusion so we wanted to get there early and be able to relax.

To be honest, Jill went down the day before to get our tickets and make sure we were going to the right place since we would actually be crossing out of China on the 90th day of her visa.  That meant no mistakes and no screw ups or she would be illegally living in China and forced to pay a 500RMB (80 USD) a day fine.  We were also worried that the Chinese government may not give her a one year visa, for this year, if she did anything that might draw their attention.  It is dangerous to cut it so close but for many reasons, we chose to do it.  It would have been no one’s fault but our own if we didn’t make it because we made the choice to wait this long.

As we looked around for the correct ticket counter, we asked a guy to take a picture of us.  He took a couple and I actually love the way the older couple behind us move in it even if we stood still.  It gives a very alive feeling to a picture that could feel locked in time.

We found the right ticket counter, and went through security, and then sat down to wait.  There were about 4 or 5 other expatriates, from Canada, Australia and New Zealand, who were being trained as tour guides for a company, and we hung out with them.

We then noticed an elderly Chinese woman who started to gargle water.  As she did this, she walked over to the edge of her seat row, and spit it out on the floor.  She proceeded to do this three times.  She also left all of her garbage on the station floor and seemed not to care about it.  Sadly, this is fairly common in China and it seems that many people don’t care about cleaning up after themselves.  Many people, inlcuding us, have cleaning people for their apartments, and cooks, and so they let someone else do all the “dirty work” for them and seem to have taken on a self-centered thought process that it isn’t their job and so they leave it for someone else.

We find that the worst part of living in China and what frustrates us since we have to walk around and constantly be on the look out to not step in spit, pee and, honestly, poop from people who go bathroom on the streets.

The station P.A. system let us know that it was time to board and we went to our cabin.  It was a four person cabin that each had beds in it so that the people continuing on to Ulan Batur, and the final destination of Moscow, could sleep as they desired.

We thought we’d have the cabin all to ourselves but, at the last minute, and gentleman walked in and sat down.  He introduced himself as “Zhang” and we introduced ourselves also.  He spoke English quite well and we talked for a while.