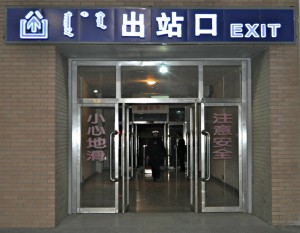 The gateway to Erlian. These are the doors that soon would be chained and locked.

After 12 hours on the train, we disembarked.

Dan and Krick were continuing on to Ulan Batur and than over to Moscow so we had to say our goodbyes.

This is one of the oddities of traveling across different countries.

So, when a train crosses the border, the train actually has to stop for about 3 or 4 hours, and be taken apart car by car.

Each car is taken into a hangar and the wheels are replaced with different sized ones depending on which country the train is entering.

We actually couldn’t find Dan and Krick inside the station so we left and looked around outside for them.

We didn’t seem them outside the station so we walked back in and then we just getting off the train.

As we talked, exchange goodbyes and hugged, the station attendant put a huge chain around the doors and locked us inside the station with the other passengers that were continuing on the trip!

We ran over, told him we had to leave in our best pantomime, and he unlocked the lock and took down the chain so we could leave.  I’m guessing that they lock everything up so that people can leave, or board, the train while they are stopped at Erlian.

We then walked across the street, turned the corner, and checked in at our hotel, The Haifeng Hotel.

Our buddy, Moeava, who I had just met a few weeks ago at The Big Smoke in Beijing, had hooked us up with the best hotel to stay at, the driver we need to get across, and back, from the border, and a driver to take us to the airport, told us to go to this hotel as it is “the only one without cockroaches and doesn’t have prostitutes calling you are 3 am” in Erlian.

Jill and I decided that sounded like good advice and heeded it.

After we checked in, we went up to the 4th floor and found a room with two twin beds.

Not how we wanted to spend this quick vacation.

So, we went back downstairs and asked for a bigger bed.  They were very nice and gave one to us.  The room was actually reasonable and, for a place like Erlian, not too shabby.  I don’t think the floors had been vacuumed in a few months but it is what it is.  And, it is Erlian.

Jill and I went out for a quick walk and noticed that the town is pretty small and fairly limited in things to do at 9 pm on a Wednesday. This didn’t surprise us so we went back to our room fairly quickly and opened a bottle of wine to relax and hang out until we fell asleep. 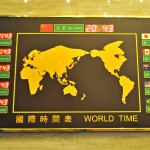 Beijing time is China time. There is only one time zone in China. 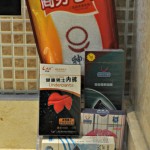 Nothing says classy like a bathroom stocked with underpants, lubricant and condoms. 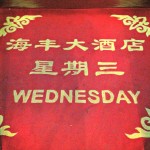 Just in case you forget what day it is, just step inside the elevator and look at the mat. 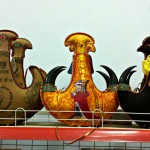 They seem to drink a lot of alcohol around Erlian. I understand why. 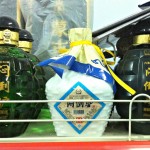 Fine alcohol is always better when it is in a bottle shaped like a grenade! 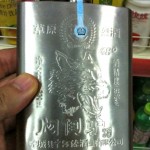 The translation is “So strong even a donkey will pass out.” 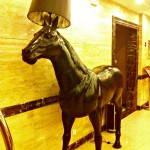 The best statue/lamp I’ve ever seen. 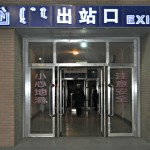 The gateway to Erlian. These are the doors that soon would be chained and locked.