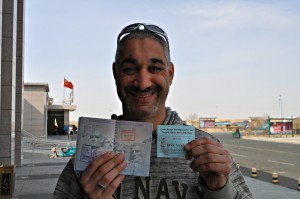 My ticket and passport stamp to leave China.

We headed towards the border and arrived at it.

Everyone jumped out of the SUV and started walking.  No one said anything to us, so Jill and I weren’t sure what to do, but we jumped out and followed them.  We figured that they are the pros and we will just pay attention and try not to upset any border guards.

Jill’s Visa, by the way, is a one year tourist visa.  Her visa rules force her to leave China every 90 days or she becomes illegal.  The fine for having overstayed your visa in China is 1000RMB a day.  This comes out to 160 USD.  In other words, we don’t want to have to pay this absurd amount of money and we don’t want to upset any border guards.

Did I mention that this is the 90th of Jill’s 90 days?  Yep, due to circumstances of my job, Chinese holidays, and whatnot, we ended up taking this risk and were a bit concerned if anything went wrong.

As we walked up, the others took out 5RMB and paid for border crossing tickets.  We pulled out 10RMB and did the same.

We continued our journey by walking near the rainbow bridge of freedom, since we are leaving China, and into their customs and immigration building.  The guards there seemed very bored, annoyed, and not happy at all.  However, after a few minutes, they let us through.

We walked out of the building and across the road was a white guy in a red track suit.

Now, I don’t know about you, but the last thing I expected to see, walking outside of the China customs and immigration building is a white guy in a red track suit.

I noticed, quite quickly, that his name was printed on his jacket.  I looked and read, “Adam” and turned to Jill and said, “How weird is that, our names are almost the same!”

There were about 15 Chinese or Mongolians hanging around outside and Adam quickly came up to us and introduced himself.

He and his buddy, Jimmy, were doing the visa run also but their ride had gotten stuck in customs so they were in “no man’s land” between China and Mongolia and had to catch a ride over to Mongolia because it is illegal to walk across the zone in between.

We said we had no idea if Diana would take someone else but they could ask her when she showed up as she seems to do this a lot and she might have room.

We found out that Adam is a tennis coach, here in Beijing, and hails from Poland.

Jimmy teaches in Beijing and is from Philadelphia.

They took the 12 hour bus ride up, the night before, and were hoping to catch the bus back down immediately after doing the run.

However, they possibly could have been stuck here for a long time if no one agreed to let them hop in.

This doesn’t seem like a big deal but we saw jeeps with 10-15 people smashed in them and with luggage on the roof and the front hood.  We even saw jeeps with people hanging out the doors.  It is sort of insane.

Diana showed up and I told Jimmy and Adam to talk to her and she agreed and they climbed into the back of the SUV and crushed themselves into the area.

Adam must be about 6 feet tall and Jimmy was probably 6’4″.  These guys were not small and it did not look comfortable.

We then went through a few checkpoints and drove over no man’s land.

We stopped at the Mongolian Customs and Immigration building and piled out.

The Mongolian immigration agent had to be the most unfriendly and rude person I’ve ever met.

She sneered at me, ignored anything I said, and when I said, “Xie xie” to thank her for giving me back my passport, she was very sarcastic and snotty.

Jill went through and decided she wouldn’t say “Xie xie” since she didn’t deserve it.

At that point we piled back into the SUV and headed for the main shopping area in Erenhot, Mongolia.

We sat around as the Mongolian women did some shopping and then jumped back in the SUV to do errands with Diana as we wanted to see what the city looked like other than a shopping mall.