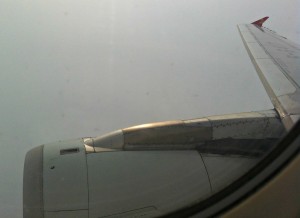 After we passed the dinosaur sculptures, our driver dropped us off at the airport.

It had 4 gates total.

We hung out for a few hours, as we were quite early, and ate some ice cream and watched the only other plane take off for the capital of Mongolia.

The loudspeaker called out our flight number, about 45 minutes before we were supposed to depart, and we headed towards the ticket counter.

There was only one person in line so we checked in quite quickly.

We then headed to security.

The line was empty and we had a metal wine bottle opener in my backpack that we wanted to see if we could get through and keep.

It wasn’t expensive so we didn’t really care if we got it through, we were just wondering about the security and how well it was done here.

Well, they stopped my backpack and asked, in English, “Do you have a knife in here?”

I responded with a very intelligent, “Huh?  A knife?” and tried to play dumb.

They were having none of it.

They opened up my backpack and took out the wine opener.  I thought, “Oh well, 4 bucks down the drain.”

They then asked, “Where is the knife?”

I actually did feel a bit confused and said, “There is no knife, just the bottle opener.”

The main security inspector played with it, making it do the “jumping jack” thing that these types of wine openers can do if they are handled correctly and studied it intently.

Then, they handed it back to me and said, “Okay, you can go.”

Jill and I were a little amazed because the corkscrew on it could definitely be used as a weapon and this was probably what they thought was the knife, but since they said it passed muster, I wasn’t going to argue.

We found our seats on the plane and a man sat in our same row beside us.

Now, Chinese are well known for spitting just about everywhere.

This includes in the gym we go.

This includes in the incredibly clean US embassy.

This includes in movie theaters.

There is pretty much no place in China where Chinese people think it is wrong to spit in and this is quite disgusting to Jill and me.

Well, the guy beside us reaches forward, grabs the barf bag, and proceeds to open it up, hock up a loogie, and then spit into the barf bag.

This was digusting enough but then he actualy put the barf bag back into the seat pocket.

We couldn’t deal with it so we asked to move.

The flight attendant spoke perfect English and moved us to the emergency exit and we thanked him a lot.

The flight had about 25 minutes before departure and yet they told us to buckle up and we started taxing out to the runway.

We were sort of surprised, since we’ve never flown on a plane that DEPARTS early, but we just did.

By the way, taxing out to the runway took about 1 minute.  This really is the smallest airport I’ve ever seen.

We took off and went straight up into the sky.

We leveled off quite quickly and they served us some yummy vegetarian snacks and I took a picture out the window.

As I was taking the picture, the attendant asked me to turn off my phone and notified us that no cameras or phones were allowed to be turned on when the plane is in flight.  It doesn’t matter if they are in airplane mode or not.  I had forgotten about this but this seems to be the law in China so I shut it off.

We then started to descend and landed quite easily.

I took a picture of the other passengers getting off the plane as we boarded the bus to the main terminal and we were almost home.

After we went through the gate, we proceeded to the bus terminal in the airport, and waited for the public bus back to our apartment.

It took about 45 minutes, because the traffic was horrible, and we talked to a very nice Chinese lady during the ride home who happened to live near us.

We said our goodbyes as the bus pulled into our stop and walked home with our luggage.

We opened our door, put our clothes and luggage away, and sat down to relax.

We were home and done with our visa run.

Almost to the second.

Not a bad way to see a part of the world and experience something that neither Jill nor I would have even imagined 10 months ago, when we met, and even a few months ago as we never expected to do a visa run like this.

All in all, it was a great experience and I’m glad we went.

And I’m glad you have all joined us on the trip and hope you enjoyed it as much as we did! 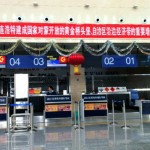 The ticket counter at the Erlian Airport. 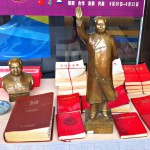 Chairman Mao, the little red book, and surprisingly, a Holy Bible right beside them in the airport gift store 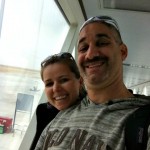 The happy couple about to fly back to Beijing. 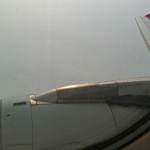 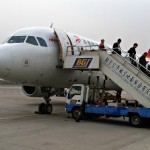 The shot on the tarmac as we disembarked in Beijing.