Day 345 in Beijing: Horse and Carriage. Or Cart.

Jill and I love wandering around Beijing and just looking at the sites.

Surprisingly, the sites are often not buildings or mountains but are just out of the ordinary experiences for us.

I don’t think I would have ever seen a horse pulling a fruit cart in the USA.

I know I wouldn’t have ever seen an electric bike with gerbils, birds, turtles and other living creatures cruising around the back streets in the USA.

China, and especially Beijing, is a crazy mixture of old and new.

As I’ve mentioned before, driving in Beijing is an incredibly wild ride.

If you are brand new, this comes as a surprise and seems scary and crazy.

After a bit you get used to it and take it as an everyday event.

The point that often escapes people is that the people living in Beijing probably only started driving cars about 10 years ago.

To think that there are 25 million people in this city, and many of them just learning to drive recently, that is rather amazing.

That is one of the problems also: they drive as if they are on horses or bikes.  This means they do u-turns in the middle of the most busy streets and stop in the middle of the road.  It is almost as if drivers here in Beijing expect their cars to be as thin and small as a bike or a horse, and therefore, you can pass them no matter where they stop.

Also, when there is a car crash, the people get out and start arguing about it and who will pay.

From what I’ve seen, many people just pay off the other driver so there isn’t a record of the accident and the authorities don’t have to be involved.

This also happens elsewhere but I’ve never seen such massive crowds gather around a small car crash and so many people yelling and stating how much a driver should pay, who is at fault, and what should be done, especially when they didn’t even see the crash.

It is almost as if a car crash is a spectator sport that becomes interactive.

I’m glad I’ve never been in one and it is another reason Jill and I are moving about 1 block from my work in a few weeks.

We can not wait to walk to work, or dinner, or the river beside our apartment, and not have to drive and deal with traffic and this type of frustration each day. 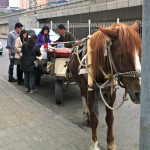 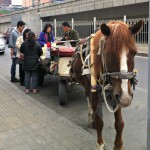 It is so nice to see horses walking around this massive city. 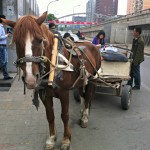 He’s actually pretty bored and seems not to want to be petted. 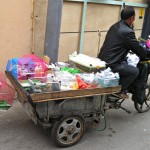 There are all kinds of animals in this cart: gerbils, birds, turtles and other ones I don’t recognize. 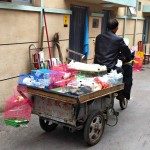 He took off pretty quickly when I started taking pictures.