Day 373 in Beijing: Sleeping Around. 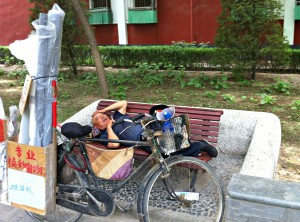 I don’t think I’ve ever seen people sleep so much as in Beijing.

I also don’t think I’ve ever seen people sleep in so many places as in Beijing.

People here just decided to sleep and go for it.

These are just a few of the pictures from the last week as Jill and I walked around Beijing and notice people sleeping.

I’ll add more as we see them.

Trust me, we see them a lot.

I love that the one guy decided to take off his shoes to sleep.  Wouldn’t want to be uncomfortable when you are sleeping on a cement wall.

If you notice, the guy sleeping by his his bike, he is smoking a cigarette while sleeping. 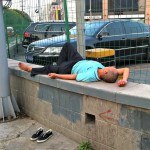 Sleeping beside one of the busiest intersections in Beijing. 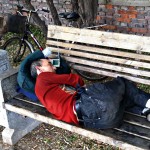 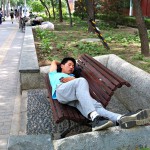 It was about 100 degrees this day. At least he was in the shade. 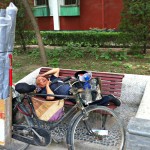