Day 376 in Beijing: Happy Anniversary to Us! 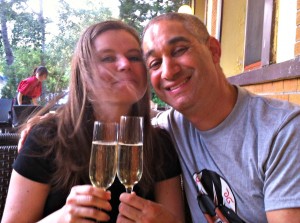 Jill and I have been together just over one year now.

We went out and celebrated with some friends on our anniversary.

We started out at Schindler’s, which was the first restaurant I hung out at when I arrived in Beijing, after I went to the 2nd Annual Beijing Craft Beer Festival.

I met my friend, Bruce Connolly, at the Beer Festival last year, and he wanted to interview me on an radio station here in Beijing.

We met four different times and it was a lot of fun.

I also got to meet Thorsten, who is the manager, and the owners, Mr. and Mrs. Schindler.  We also celebrated Jill’s birthday there right after she arrived in Beijing.

Our friend, Rachel Ouyang, also came with us and then we went over to The Big Smoke.

The Big Smoke, as loyal readers know, is where my buddies, Kris Ryan, Gordon Kutil, Alex Acker, Kris Li, and Richard Ammerman.  Kris and Gordon are the owners of The Big Smoke and Alex, Kris and Richard are the brewmasters at Jing A Brewery.  Jill and I love these guys and think of them as our family here in Beijing.

Gordon was there and we hung out with him and his girlfriend, Sarah Ting-Ting Hou, showed up later and we were able to celebrate with both of them.

Suffice to say, it was a great anniversary and just the first of many that Jill and I plan to have all around this Earth.  China is just the first stop of our lives together.