Day 385 in Beijing: A beer so nice they had to name it twice! 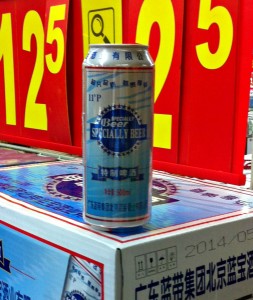 A beer so nice they had to name it twice!

And so, for some reason, they did and the label specifically states this is “Specially Beer SPECIALLY BEER” just in case you missed it the first time.

As you can see from the red and yellow signs behind the beer, we went to Wal-Mart in China.

I rip on Wal-Mart, and its destructive habits on the workers of the world, but I actually did shop there.

Crucify me as appropriate.

I ended up buying a bucket, since our air conditioner’s hose isn’t long enough to reach out the window, and leaks, to catch the leaking water.  It is a long story and worth another blog post.  One of the cute weird little details of our apartment and we find it endearing actually.

The best part of the trip was looking at the different beers here.

In the USA, Blue Diamond is a almond company in California and, I’m guessing, Diamond Blue is not associated with them in any way.

Things seem to happen that way here and it isn’t just because of Chinglish.

This SPECIALLY BEER, by the way, can’t be that special because it only costs about 40 US cents for a tall boy.  Then again, 2.50 for 6 tall boys, if you just want to party, is not a bad deal.

By the way, they had cases of Budweiser here also.  I haven’t seen any Coors or Miller in Beijing but Budwesier seems to have a good handle on the local economy and how to sell their beer here.

I guessing the taste isn’t that special either as Jill and I had tried some of the cheaper beers here in China and they are fairly similar to the cheap and terrible beers in the USA.  Luckily, craft brews are really taking off and some of our closest friends are brew-masters.

Of course you’ve seen my Jing A posts and pictures of me drinking their beers through the year.  Trust me, it is as good as anything you can get in the USA.