This is where the Olympic Torch was located outside the Bird’s Nest.

Continuing Jill’s and my photo shoot at the Bird’s Nest from a few months ago, I thought I’d post these pictures of the actual structure.

It is quite imposing and very impressive.

The sad part is it isn’t really used for anything at this point.

There was a concert here, in the past year, but that is it.

The concert, by the way, was Justin Timberlake.

I almost bought tickets to see him, since I actually like his music, and think he is really quite funny, and it would have been an amazing blog post if I had gone.

It was basically a great night for photographs, because the moon was full, but by the time we arrived, the pollution was pretty horrendous.

If you look close enough, you can see little dust specks in the photos, and it was hard to breathe.

It is definitely a major problem in Beijing, and much of China, at this point and hopefully it will be taken seriously.

Jill and I only plan to be here for my three year contract so we aren’t that worried about it but if I had kids, or planned to be here for the long haul, it would make my choice a very difficult one.

By the way, since we took these pictures, Jill’s camera has not been working correctly and we are pretty sure it is because of the dust and grime that got into it.

Sadly, we know a lot of professional photographers here in Beijing and they don’t trust anyone to fix their cameras so we are stuck only using my iPhone 4 while we are traveling to Turkey and Greece.

Hopefully the pictures will turn out nice enough and we won’t lose much in memories.

Then again, we plan to live in Turkey or Greece, sometime in the future, and we can take more pictures when we live there! 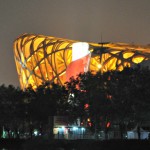 This is where the Olympic Torch was located outside the Bird’s Nest. 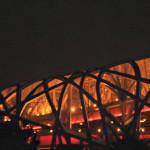 As the moon moves through the night over the Bird’s Nest. 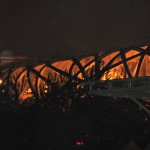 The full moon hovering over the Bird’s Nest. 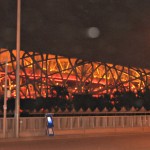 Dust particles, and pollution, in the air. 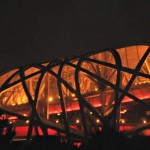 Another shot of the full moon over the Bird’s Nest.