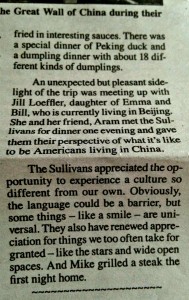 I have to imagine this is the first time that the name “Aram” has been used in the Cedar Rapids Press.

But I’m a huge fan of Ron Burgundy and like dropping his quotes to sound important.

Jill is from Nebraska, Cedar Rapids, to be exact, and a family friend, Kate and Mike Sullivan, were visiting in Beijing on official business a few months ago.

Kate is a Nebraska state senator and Mike runs the local bank.

Now, I don’t think I’ve ever met a state senator, or the owner of a bank, so this was a pretty cool experience.

I’ve met a lot of people from Nebraska, and I have to say, I think I’ve like every single one of them.

Most of the Nebraskans I’ve met are kind, generous and just good people.

There is something about the Mid-West that seems to breed those kind of people and I appreciate that.

Well, one of the surprises we received a while ago was a newspaper report from Jill’s mom, Emma, when she emailed us a report of Kate and Mike’s trip to China.

The Cedar Rapids Press article actually mentioned that Kate and Mike had seen us during the trip.

I can’t imagine being mentioned in a newspaper, in Nebraska, for anything else I’ve done so this was specifically because of Jill.

And I would agree.