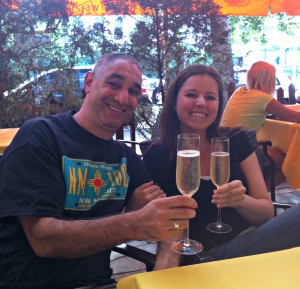 As you , my faithful readers know, we have a ritual of good bye drinks when we go on a trip.

This actually started because our friend, Thorsten, from Schindler’s restaurant, suggested it.

If you haven’t read my earlier posts, Schindler’s is run by Mr. Schindler.

He has lived in Beijing for somewhere close to 30 years.

His life, like so many expats living in Beijing, is not what most restaurant owners lives usually seem.

He was actually the attaché for the East German Embassy during the Cold War.

He has run the restaurants for most of his time here but more importantly, he actually physically handed over the keys to the attaché for the combined German state when the wall fell and they became a single nation.

He is also a wonderfully jovial man and a heck of a person.  His wife made sure that Jill had a birthday cake for her 40th birthday party 5 days after Jill arrived and we celebrated her coming to Beijing.

Thorsten is the manager of Schindler’s and one of my first friends from my travels to Beijing.

Thorsten always makes sure that we come by and have our farewell drinks and we have a few pictures to commemorate the occasion.

It seems many people leave Beijing and it is a nice way to say goodbye and make sure to connect and show you care.

This was for our upcoming trip to Turkey and Greece and we were very excited and could not wait to get out of Beijing and to some place that had beautiful views and beaches, was less crowded and clean.

We’d had enough of pollution, masses of 25 million people, and cement and skyscrapers for as far as the eye could see.  It was definitely time for a change.

We’d been in Beijing for 7 months straight.

Every expatriate we know has said that they need to leave every 3 months or they start to get depressed, anxious and angry.

We had hit that point a few months ago but weren’t in the place to take off.

We won’t make that mistake again as it affected our emotional and physical health way too much and is advice that needs to be respected going forward.

It is the same thing I’d tell my clients so i might as well pay attention to my own prescription!