Day 433 In Beijing: The Flight And Arrival In Xinjiang. 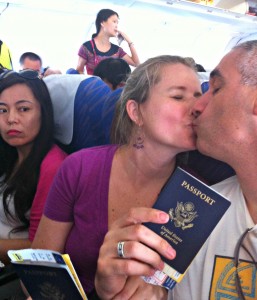 I love the look of the woman beside us.

Jill and I heard our flight called and headed out.

One of the interesting things about Beijing airport is that it handles 73,000,000 people a year.

That is utterly absurd and insane number.

I can’t even get my mind around it.

It is also one of the worst on time arrival and departure airports in the world.

This I can get my mind around after living in China.

However, we’ve been quite lucky since almost all our flights have been on time and quite enjoyable regardless of which airline we’ve used.

If you check out China Southern or China Eastern, they are ranked quite lowly overall.

However, I have to say we’ve had decent food, good service, and very comfortable seats every time we’ve used them and would definitely recommend them as they didn’t seem very different from United, Delta or any of the American airlines we’ve used previously.

Turkish Airlines, on the other hand, is amazing and we love flying them whenever possible.

But that is a blog for another day as we flew them numerous times inside Turkey and took lots of pictures.

We had a layover in Xinjiang, where our ex-roommate comes from, and it was beautiful.

It was also boiling outside.  It was somewhere around 113 degrees according to our pilot.

We hopped off the plane and after checking through customs, hung out in the waiting area for our next flight.

An, interesting, and confusing part of China is that even though it is the size of the USA, it only has one time zone.

Even though the suns rises and sets 3 hours earlier.  So, basically it is really 3:30 am in Beijing when it is 6:30 AM in Xinjiang.  It doesn’t make any logical sense.

It is silly rule that the government enforces for no particular reason that I want to attempt to explain on this blog but not while I’m living in China.

Either way, it was a beautiful sunset and a gorgeous landscape.