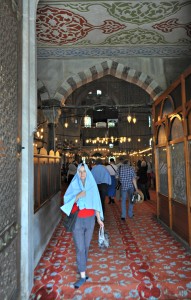 About to enter the Blue Mosque.

Jill and I ventured over to the Blue Mosque or as it is also known, the Sultanahamet Mosque, after we survived the two Medusa looking right at us in the Basilica Cistern.

We had been able to see the outside of it, but because of prayers times and not be allowed in as we are not Muslim, we had not been able to go inside on this trip.

We made sure that we would be visiting during a non-prayer time and wanted to see it before it got really busy.

The Blue Mosque is, like the Hagia Sofia, quite huge but it doesn’t seem to be as big inside and there is a lot more space saved for prayers, since it is a working mosque, and that means it gets quite crowded.

We headed over and got in line.

There were probably about 150 people ahead of us but since it is free, and one only has to cover up, and take off their shoes, the line moves pretty quickly.

I was lucky and only had to pull my shorts down a bit so they covered my knees.

Jill had to cover her head with a scarf, which they loaned to us, and since it was hot, she wasn’t particularly happy about it.  I don’t blame her but otherwise we wouldn’t have been able to go inside.

Once we got inside it was gorgeous.

It is much more ornate than the Hagia Sofia and beautiful in a different way.

I truly love the hanging lights, and the stained glass windows, with all the ornate tiles covering the walls.

There was some beautiful pieces of art dedicated to Mohammed and the Muslim religion on the walls and we took our time seeing it all.

Therefore it is much easier to go in, look around quickly, and leave.

Since Jill was hot, and we were starting to get hungry, the Blue Mosque probably only took about 20-30 minutes total.

It would have been nice to have gone right when it opened, so it was less busy, and had more time to just relax.