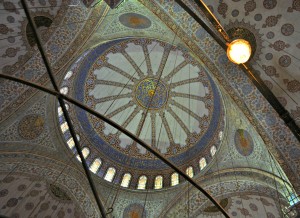 The dome of the Blue Mosque.

The Blue Mosque has an amazing history.

It has a tomb for the founder, a madrasa and a hospice inside it.

It is both a major tourist attraction and a working mosque, therefore it is closed to visitors at least 3 times a day because of daily prayers.

As you’ve seen, women must cover their heads, their shoulders and down past their ankles.

Men must cover their knees.

It seems unfair but that is the way it is.

Much of Malaysia, when we visited there, had the same rules in the mosques.

It is made up of over 20,000 handmade tiles, which you can see in many of the pictures I’ve posted here.

There is also over 200 stained glass windows.

It is truly a sight to behold and to have seen the Hagia Sofia, the Basilica Cistern, and the Blue Mosque, all in one day, was almost too much.

Next time we go, we will take more time and really take in each place more carefully.

Hopefully we will be living in Turkey, or Greece, in the next few years and will be able to go more often, and therefore, not have to just be tourist, but an actual resident that can relax and go when it isn’t as busy. 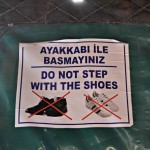 Good advice when entering a mosque. 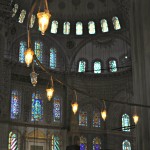 The last shot of the Blue Mosque interior. 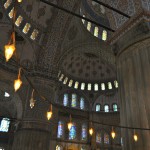 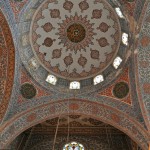 One of the smaller domes in the Blue Mosque. 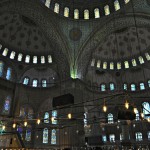 Inside the Blue Mosque. 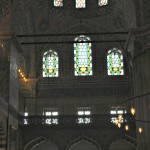 Notice the man praying and the man standing on the left. 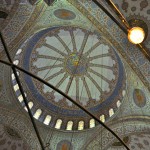 The dome of the Blue Mosque. 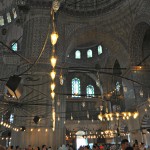 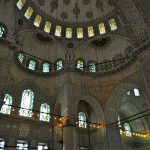 And more of the Blue Mosque.