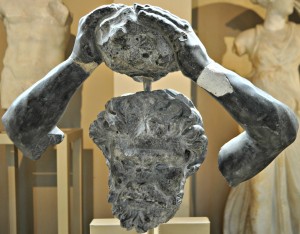 Probably my favorite display in the whole museum.

As I mentioned in the previous blog post, Jill’s and my trip to the Istanbul Archaeology Museum was cut short.

Because I turned off my cell phone, with the Turkish SIM card in it, and didn’t realize that when I did that, and then attempted to turn it back on, it would lock me out if I didn’t enter a pass code.

Now, I’m guessing that pretty much every single person in Turkey knows this, which is why they didn’t tell me about this, but since i’m a foreigner, I didn’t.

It is actually a fairly smart way to stop people from using your phone if they steal it since they wouldn’t know the pass code to get in and your SIM card would then be worthless.

They could still sell your phone, or put in their own SIM card, but it does make it slightly more of a hassle than in the USA where they don’t have automatic kill switches or locked SIM cards at this point.

I believe they are trying to pass a law to make automatic kill switches in cell phones in the USA but the phone corporations are against it and putting lots of money towards killing it.

Which means, of course, it would be beneficial to everyone except the phone companies since they wouldn’t have as many consumers having to buy phones when theirs are stolen.

In other words, it is only common sense to have a kill switch which is why the phone companies are against it.

We continued the tour around the museum for a bit and then headed down to the Turk Cell store to figure out what to do.

When we arrived, the salesperson that helped us yesterday was there and helped us right away.  He laughed a little bit at our predicament and was very kind.

We then prepared to head back but realized our ticket was for single entry and we weren’t going to be allowed back in.

At this point we were pretty tired and decided to take a break.

We knew we’d be heading out to see Jill’s friend, Kaan, in a few hours and just made the choice to head to the ferry early and take our time and enjoy the clean air, beautiful blue skies and blue waters.

All in all, I think we made the right choice.