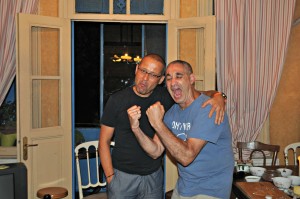 Me doing the famous “KHHHHHAAAANNNN!” yell popularized by William Shatner.

Any lovers of Star Trek will know immediately why I love the title of the blog post.

If you don’t know it, here is the classic over-acted scene by William Shatner, as James Tiberius Kirk, in Star Trek 2: The Wrath of Khan.

Unlike the Khan in the movie, this Kaan is an very kind, generous and wonderful person.

He also didn’t have a J.J. Abrams movie made about him that utterly stunk and has basically shown that there should never be an English accented Khan.  And that Abrams is a hack who is going to destroy the whole Star Trek mythos.

Our Kaan met Jill in 2006 at a wedding in Istanbul.

Kaan also lived in San Francisco but they didn’t really become friends until 2010 when she came over to live in Turkey for 3 months after quitting her job and deciding to strike out on her own.

Kaan is a really funny, and enthusiast guy, who also happens to be a cheese and wine connoisseur.

Jill had told me about this but we both didn’t realize nearly how specialized his knowledge, and his skills, were until we hung out with him during the evening.

First off, we bought some cheese as a gift and then felt incredibly embarrassed by our choice since the cheeses he brought were amazing!

We bought the classic white cheese that they have in Turkey.  We love it beyond belief and it is very hard to get it here in Beijing so we thought it would be good enough.

Kaan, being the cheese guru, had bought cheeses from Italy and they were incredibly tasty.

Kaan also makes his own wine so he pulled out a few bottles, including my favorite, “the mutt” which is a blend of a bunch of different grapes, all from the Thrace region in Turkey.

It was quite yummy and went great with the cheeses.

Kaan was a fantastic host and it was a joy to meet him.   He would be traveling, most of the rest of our trip, so we sadly didn’t get a chance to see him again, but we will when we start living in Turkey in a few years.

And, seriously, how cool is it I was able to do the “KHHHHHHAAAAANNNNNNN” yell with someone actually named Kaan.

You can see he is rather bemused, and very kind to humor me, in my silliness.