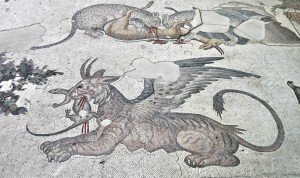 I love me a griffin eating some freshly caught prey!

Neither Jill nor I had ever heard of the Mosaic Museum before this trip.

We actually didn’t hear of it until we were on this trip.

We bought a 3 day pass that allowed us to see a bunch of different sites and the Mosaic Museum was one of the attractions.

We decided to check it out, since it was free, but we didn’t expect much.

We were blown away.

The Mosaic Museum is about 1000 meters behind the Blue Mosque and a hidden treasure.

It is hardly noticeable from the outside, and if we hadn’t been asking directions, there is no way we would have found it.

There was a guard/ticket agent and he seemed somewhat surprised, and happy, to see us.

For about half of our visit, we were the only people in this amazing structure.

The mosaics seem to be from Emperor Justinian’s reign, which was about 527-565 AD.  They were found by two Turkish archaeologists in the 1930s and 1950s.

It supposedly has over 400,000 stones that were used to make the mosaics.

In other words, it is one massive mosaic.

Some are in excellent condition but most have seen the wear and tear of time.

Jill and I were, once again, very moved by this bit of history and art that has been found and restored. 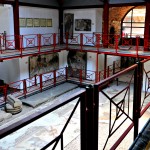 The larger view of the mosaic on the ground. 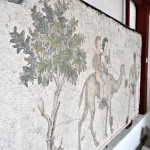 One of the mosaics on the wall. 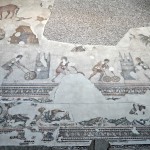 More of the large mosaic on the floor. 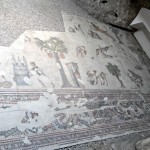 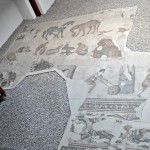 More of the massive mosaic. 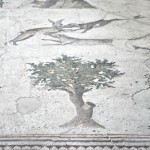 More close ups of the mosaic. 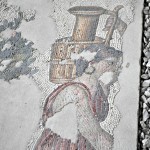 A lady carrying a water jug. 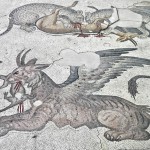 I love me a griffin eating some freshly caught prey! 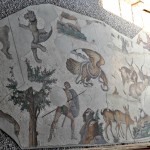 A massive part of the intact mosaic. 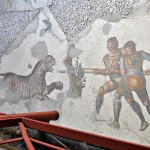 I’m betting on the tiger to win this battle. 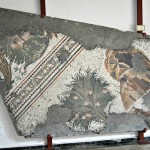 One of the hanging mosaics.