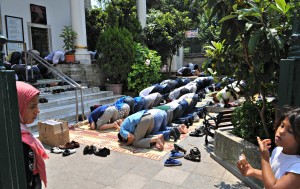 Jill and I walked out of the Harem and started to walk up the hill to the Grand Bazaar.

We happened to walk out during prayer time even though we had no idea.

It wasn’t until we walked by this mosque that we realized that we were in the middle of prayer time.

We decided to wait, and just watch, as the prayer continued.

Up until this time, every time we’ve seen a prayer service, the people have been inside and the mosque had enough room.

This time, and maybe because it was Ramadan, it was overflowing with followers.

We thought it would only be in the courtyard but then we walked on and noticed that it was in the yard beside the mosque and it was fantastic.

There is something impressive, and moving, to seeing a large crowd of people, all moving in unison, as they stand up, sit down, bow forward, and then get up again and disperse as the prayers ended.

You can see the Blue Mosque in the background of one of the pictures and I love how it brings everything together and makes the picture seem finished.

About 2 minutes after the prayer ended the park was empty and everyone had gone back to what they were doing.

Thinking of it now, I probably should have gotten a photograph of it to show how different the park looked during and after.

Maybe next time we are in Istanbul I will do just that. 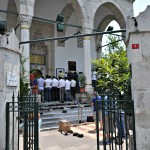 The mosque from the outside. 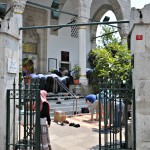 A muslim girl watches over the people during their prayers. 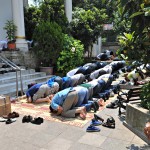 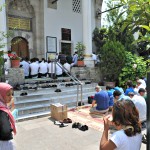 As prayer is about to finish. The muslim girl looks like she wish she could have had ice cream also. 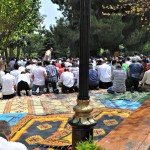 The park beside the mosque as people pray. 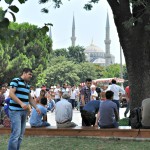 The park as it empties after prayer.