People mingling and rugs hung on the wall outside The Grand Bazaar.

Jill and I kept walking around, feeling like we were in Wonderland, and starring at all the beautiful creations that humans have made and have on display.

However, there is something that we noticed after living in Beijing and traveling to massive cities.

We get worn out.

If it was, we definitely couldn’t deal with Beijing, and we can deal with it pretty well, all things considered.

We just realized that we wanted a little down time and a little quiet.

We’d seen so much in the past 2 days, after flying for 12 hours, that we would need a break.

So, we didn’t stay as long as we would have usually stayed but we still felt quite satisfied in what we saw at The Grand Bazaar.

It is an amazing place and one could easily spend a full day in it and just get lost wandering around, talking to the salespeople, and seeing pretty much anything one desires, on display.

Speaking of salespeople, that is another thing we are tired of after living in China: Bargaining.

It is also what happens in Turkey and we just aren’t fans of it.

Just give us a fair price and we will pay it.

It just becomes so tiring to bargain for something, especially when you just want to look and take your time, and the salespeople jump on you and start telling you prices when you don’t even want anything.

I’m sure they make a lot of money but, for us, it just makes us want to leave and not even look at something we might want to buy because we don’t want to deal with the drama.

That is another reason we didn’t spend a lot of time in The Grand Bazaar since all the salespeople immediately call to you and start telling you to come in, try their goods, and whatnot.

It is just tiring.

So, we ended up taking off after about 1 or 2 hours.

It was still amazing and definitely worth the trip.

We just needed a little quiet and thought it would be nice to go back to our friend, Andac’s apartment, enjoy some yummy Turkish white cheese, bread and wine.

And we did just that.

And it was nice.

Just as we guessed. 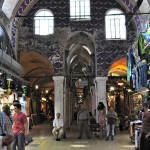 Notice the man underneath the archway. I sure did. 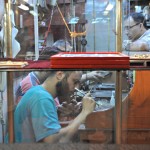 Jewelers working at their craft. 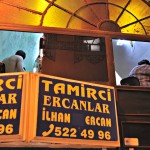 More jewelers working away. It was incredibly hot in The Grand Bazaar. 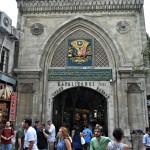 Another entrance to The Grand Bazaar. 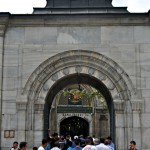 A second wall outside the entrance of The Grand Bazaar. 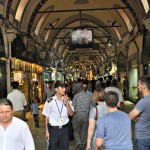 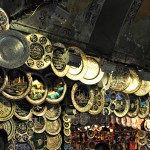 Some of the beautiful rugs on display in The Grand Bazaar. 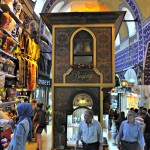 A building right in the middle of The Grand Bazaar walkway. 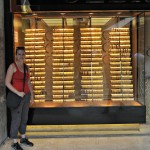 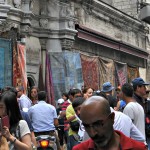 People mingling and rugs hung on the wall outside The Grand Bazaar. 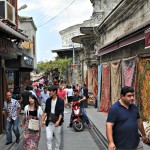 More rugs on the wall and people walking outside The Grand Bazaar.