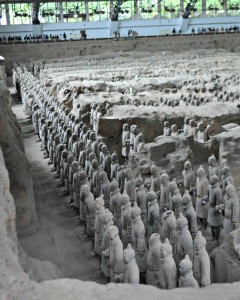 It was time to for Jill and me to see Pit 1.

We went in a side door as we were continuing our backwards trip and therefore we entered into the end which was not nearly as busy as the main doors.

It was actually a wonderful way to start/end this visit as the crowds near Pit 1’s main entrance were incredibly deep and people were pushing and shoving a lot.

Now, pushing and shoving is very common in China but Jill and I just get sick and tired of feeling like you have to fight someone just to stand where you are.

It is honestly something we will not miss when we leave and one of the most aggravating issues with crowds in China: people just have no sense of space or respect for other people who are near them.

It is a cultural issue that I will never get used to, and honestly, don’t intend to because if I did that in the USA, or pretty much anywhere else, I’d get beaten up.

Therefore, going in the back way, where it was almost empty, was incredibly relaxing and a relief.

We also wandered against the flow of people which allowed us to stop and see what we wanted and not be pushed along by the masses.

It is as simple as that.

It is massively long and incredibly wide.

They have done a wonderful job rebuilding the warriors and making them as realistic as possible, again without the painted armor and wagons, and it is very powerful to see them lined up and ready for action.

Jill and I walked all the way around the pit and asked an Australian gentleman to take our picture so we could show that we were there and have some wonderful memories.

He lived about 1 hour north of Melbourne and had run an organic farm that was very successful and now just relaxes, enjoys life, and they travel for about 1-2 months a year.

This year they chose to visit China.  They said that they had enjoyed their trip but are ready to get home to some peace and quiet and fresh air.

As I lived in Melbourne, back in 1990, for one month, I absolutely understood and envied them.

Living on the beach, in fresh air, and with quiet, is something Jill and I are very much looking forward to sometime in the future.

They told us that they generally aren’t tour group people but decided to do one because they’d heard traveling in China is tough.

They had booked a tour through an agency in the USA and ended up with 35 North American tourists, 1 Canadian and themselves.

They said it had been fun to meet all these North Americans, and the one Canadian, and it was a very different experience than it would have been with just Australians.

Just another reason I love to travel, meeting so many people, having so many different experiences and view points, and allowing themselves to be exposed to life in a different way.

This is exactly the life Jill and I want to have, and are having, at this moment.

We are incredibly grateful for the ability to live this life, have these experiences, and go places that many people will never go.

Such is the life of an expatriate. 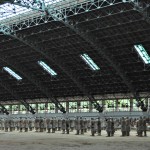 A mass of warriors viewed from the back of the hangar. 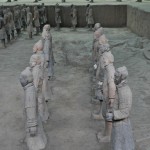 Up close and personal with the terracotta warriors. 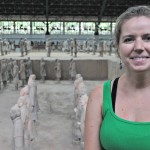 Jill and the warriors. 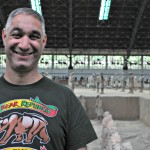 The warriors and me. 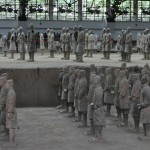 More of the warriors. 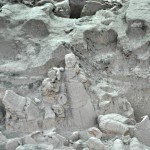 One of the warriors waiting to be excavated. 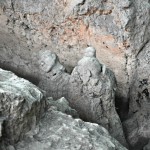 More soldiers waiting to be excavated. 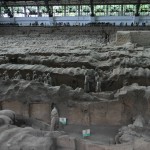 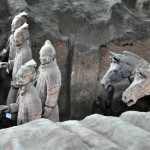 Soldiers and their horses. 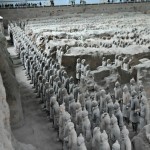