The final shot of the Terracotta Army.

Jill and I continued our tour around Pit 1 and were able to see more of the warriors that were getting excavated and refurbished.

We didn’t hire a guide, since we were in a rush and didn’t want to bargain.

Yes, everything in China is a bargaining event and it gets very tiring.

Sometimes we just want to pay a fair price and be done with it so we just give up and don’t bother.

Imagine living each day as if you were going into a car dealership and having to bargain for a lot of what you want.

It tends to make us cynical and jaded and we, therefore, don’t have as much interaction as we normally would with others.

So, we skipped the tour guide and I wish we hadn’t because I would have liked to know why they are wrapped in cellophane.

Our guess was they were being glued back together and this allows them to hold until the glue settles but we aren’t sure.

Either way, walking around the back of the exhibit was a wonderful way to end our visit to the Terracotta Army. 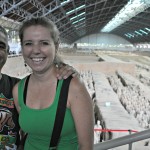 Jill and me in front of the Army. 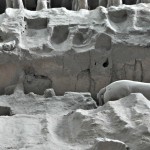 Some of the soldiers and their horses. 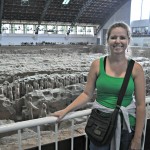 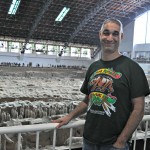 Some of the newly excavated soldiers. 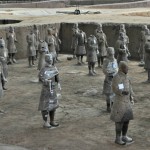 More of the newly excavated soldiers. 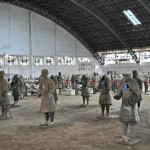 Close up of the newly excavate soldiers. 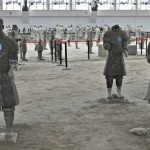 Soldiers from the far end of the exhibit. 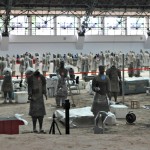 Soldiers recently excavated. It said, “NO PHOTOS” but everyone was taking them and the guards didn’t care. 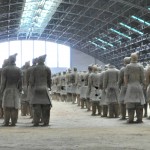 The final shot of the Terracotta Army.