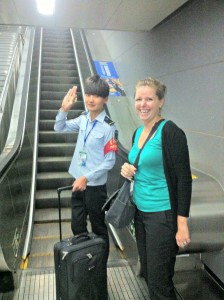 Jill and I love train travel in China.

It really is fairly simple, fairly fast, and fairly inexpensive.

HSR, which I still call “Bullet Trains” from the time when I lived in Japan (which is a whole different blog post and would be it’s own website since I lived there from 1996-1997 and taught English in the JET program), stands for High Speed Rail here in China.

Therefore, HSR is the abbreviation.

As mentioned previously, we took an overnight train, which took about 13 hours, to Xian but we decided we wanted to be back Friday evening and get a good night’s rest on the return trip so we booked the HSR.

The train ride to Xian, on the slower train, cost about $70 USD.

It is about 1000 kilometers away and would cost $180 USD round-trip if we did both ways.

I wish trains in the USA would be so cheap and so easy to use but they aren’t.

I honestly love train travel as you get to meet people, hang out, see the countryside, and just relax.

The beds on the 13 hour train were soft enough, even though they weren’t really that soft, to sleep but we prefer the HSR so we can get where we are going and just be done with it.

It is also very cool to see the speedometer, in each car, showing “304 KPH” as we fly through the countryside.

Speaking of the countryside, and 1000 KMs of it, it is pretty sad.

So much of China is being turned into massive cities, in the middle of nowhere, with these buildings that all look the same and are just huge blocks of boring concrete.

That is a lot of displacement

China is trying to become a 1st world country, at light year speed, and is actually killing all the culture and style that made China beautiful in the past.

It also is producing loads of toxins, pollution, and waste as they do this.

An example of this is Tianjin.  We will be going there for the October holiday.  It is about 30 minutes, by HSR, from Beijing.

I know I sure hadn’t until I went there for my job.

And that isn’t even called a “first tier” city in China.

Jill and I really enjoy the quiet side of China and there is less and less of that around as it “progresses” into the 21st century.

We arrived in Beijing at 10:45 pm and were cutting it very tight as the subways all shut down at 11:30 pm here.

We ran to the first subway, caught it as there were 2 more trains after us but we didn’t want to chance it, then got to our transfer station and caught the last subway train to our final transfer and ran like mad to get to it and made it with about 30 seconds to spare or we would have had to get a taxi, on Friday night at 11:29 pm, and that is not easy because so many are full and many won’t stop to pick us up.  So, we sat down on the final train, relaxed as it was almost empty, and then walked to the exit.

As we did this, a nice young gentleman noticed Jill’s slight limp, from her fall that morning, and offered to walk her bag for her.

She accepted and he helped us out of the station and then locked the gates closed for the night.

After 2.5 days of pure madness and wildness, we walked 3 blocks from the station and were home in Beijing.