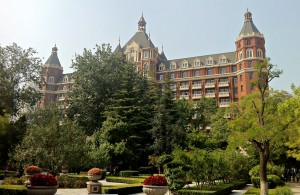 The Ritz-Carlton Hotel in Tianjin.

Jill, Nuria, and I decided to cruise around Tianjin and check out the sites.

Again, this is a city of 15,000,000 people and there are lots of high rises, just like in Beijing, and we were ready for the same old mega-city yuck of sprawl and “progress.”

Nuria had told us that there are certain areas of Tianjin, since it had been a trading post and had different rules than much of China in the early 1900s, and we would be in for a surprise.

We walked around the “British” section and could have sworn we were back in London or a British city.

The buildings definitely did not resemble anything we’d seen in China and we enjoy the quiet and serene walk through Tianjin’s financial district.  The district was pretty dead, since it is the National Holiday, and everyone was off seeing their family but, even so, it was a stark contrast to the constant noise and drama of Beijing.

We absolutely loved the architecture and that these buildings are historical and will be protected instead of being torn down to make room for more skyscrapers.

We then went to lunch and had a nice authentic Chinese meal and the manager of the restaurant came over and started speaking to us in perfect English.

He was super friendly and very kind.

Nuria has lived in China for 6 years and speaks incredible Mandarin but being able to speak to someone in English makes it easier for all of us because she doesn’t have to translate everything.

I have to admit, her translations are hilarious for this one reason: Her native tongue is Spanish and she then, because of her own history, usually translates the Mandarin to me in Spanish.

Now, I know some Spanish, from living in California and being an avid salsa dancer, but I definitely am not fluent.

I am usually able to catch the gist of what she is saying and then say, “Uh, English for Jill, please.”

Nuria, who has the most positive attitude of anyone I’ve ever met, just starts laughing and translates quickly into English.

We then decided to head home and took the subway, which was fairly empty, and bought some fruit off a street merchant and started to get ready to out to the Italian Quarter later that night.