Some events are universal.

At least between Beijing and the San Francisco Bay Area.

When on BART, I noticed that many people were staring at their phones or tablets instead of interacting with the person next to them.

Would this be true of Beijing. 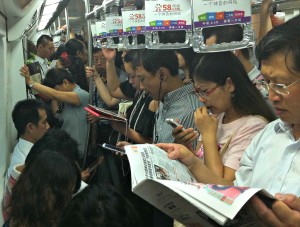 Millions of people not connecting personally with each other at the same time.

The younger people are looking at their iPhones, iPads and Android phones.  The one person that is of my generation is reading a newspaper.

Different generations connecting in their own way.

I had been playing solitaire, ironically, when I noticed everyone disconnecting from each other.

I was just as separate as they were.

So, I pulled out my camera and took a picture.