The story behind this wine is a wine maker, and winery, named Charles Shaw used to have incredibly high end, and expensive, wines.  At one point, he sold the company, and to his chagrin, his name.  This company eventually decided to make bulk wine for Trader Joe’s and his name was forever connected to this cheap, but still yummy, wine.

Well, as you can tell, I enjoy my drink and my food, from time to time.  I grew up in the wine country of Sonoma County, which is about 1 hour north of San Francisco, and worked in wineries growing up.  I’ve been a fan of wine and beer for most my adult life and enjoy all the complexities and nuances that come from a winemaker or brew-master that truly knows their craft.

In accordance with that, I decided to do a bit of a taste test with some Chinese made wines.

I was expecting them to be pretty terrible.

I was pleasantly surprised. 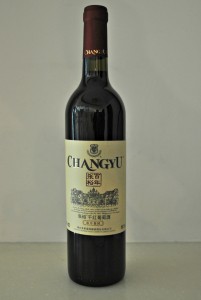 How about a bottle of 2 Buck Changyu for your wine tasting pleasure?

The first was the now named “2 Buck Changyu” since it is made by a winery named Changyu and costs about 2 bucks American.  It was similar to a pinot noir or a rose in that it was light, fruity and simple wine.  A nice fruit forward wine that tasted of cherry, berry and a hint of chocolate.  Very nice for a warm evening and with some lighter foods.  Overall, I’d give it 3.5 out of 5 stars. 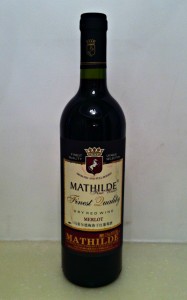 This is not Waltzing Mathilde.

The next was by a winery named Mathilde.  It was a 2012 vintage merlot and cost a whopping 4 bucks American.  It was also a bit light and the wine was definitely young.  I decanted it for about 15 minutes but it needs some age before the fruit will truly come out.  Again, nice hints of cherry and berries.  I’d drink it with food that wouldn’t overpower it because of it’s subtle flavor.  Overall, also about a 3.5 out of 5 stars.

I’ve tried a few other bottles, none costing more than 10 bucks American, and have been quite impressed with the quality for the cost.  Not saying these are equal to Sonoma County wines, but they also cost a heck of a lot less, so that is the scale to which they must be measured.

Simply stated, if I’m in a restaurant, and I want a bottle of wine for dinner, I won’t immediately think of only drinking Californian, Chilean or French now.  My mind has been opened up by this experience and will have to think twice regarding what food might actually go best with my dinner and the Chinese wines just might be the choice.

I have also heard that China is putting in massive amounts of money to build top of the line vineyards and wineries to compete with the rest of the world.  After living here for almost 3.5 months, there is no way I’d bet against them. 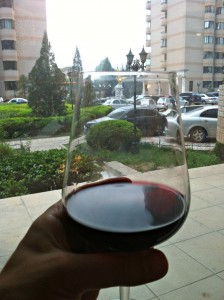 The view from my balcony.

One Response to Day 111 in Beijing: 2 Buck Changyu.