Jill and I visited Chaoyang Park today. We had no idea what it would be like and we were planning on connecting up with friends there and then going on to our next destination.

We took bus #9, which is an express, and Google Maps told us it would take 1 hour and 25 minutes. The subway would only take about 45 minutes but we had to do a lot more walking and it was not direct. Therefore, we decided to take the bus and just enjoy the scenery.

We drove by an IKEA that we had shopped at before and realized it is much closer than we thought which is a nice surprise because hauling stuff on a long bus ride can be a pain and this makes it easier, and cheaper, than getting a taxi when we don’t need to rush home.

As we rode the double-decker bus, we look around and saw all the views and felt like tourists even though we’ve been here for 4 months now. There is always something new to see in Beijing and it is a constantly changing landscape. 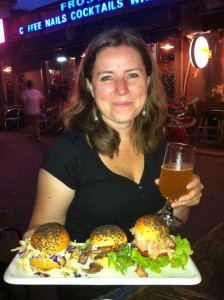 The sliders and a beer at The Big Smoke. Jill’s first night in Beijing.

An example of this is our favorite brewpub, The Big Smoke, We usually go every week or so and truly enjoy the food, people and the great beer there. We’ve become friends with a large group of expats there and it feels a bit like home since I had a local hangout called Elevation 66, back in Richmond, CA, and it has the exact same feel.

Well, Jill and I have been quite busy and we haven’t been there for 2 or 3 weeks. We went last night. During that time, someone tore down a one story building, built a new one, and opened a restaurant. It is fully decorated and outfitted to do business and was open that night. There wasn’t much business, but it was open. In 3 weeks

I also previously blogged about a restaurant that my friend, Nuria, took me to the day before she went home for summer vacation. It was fantastic with 10 different dishes of food, a 600 ML bottle of beer and a fun atmosphere. The dinner, for 2 people and more than we could eat, cost about 10 bucks total. I had planned to take Jill there as it was close to my house and everything about the place just felt right. I went back 4 days later and it was gone. They had torn it down and had already started building a new restaurant. That was about 6 weeks ago. It seems they decided to make it a Thai or Vietnamese food restaurant but we haven’t actually tried their food yet. That will be another blog post most likely.

As Ferris Bueller once stated, “Life moves pretty fast around here. If you blink, you might miss it.”

Nowhere is this more true than in Beijing.