Day 449 In Beijing: The Basilica Cistern. 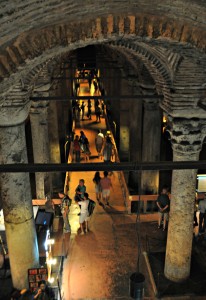 The Basilica Cistern is about 500 feet from the Hagia Sofia.

It is actually quite easy to miss because it is just a rather small building, made of brick, that is fairly simple in the midst of all the hustle and bustle all around this area of Istanbul.

Luckily, both Jill and I had been to the cistern before and knew that we wanted to go see it again.

It truly is an amazingly beautiful, and totally strange, place out of history.

It is the largest of several hundred cisterns that lie below Istanbul.

It was originally built in the 6th century by Emperor Justinian.

Well, to be honest, he didn’t build it.

His slaves built it.  And, according to ancient texts, there were over 7,000 slaves that built it.

The cistern, at this point, only has a few feet of water in it since it is used as a museum and people are allowed to go inside it.  If it was full, it could contain up to 100,000 tons of water.

As you can see, we walked on fairly secure walkways around the cistern.

It was definitely slippery but we loved it.

Imagine this: Up until 1985, they used boats to float around the cistern.

How incredible would that have been?

I wish we could have done that!