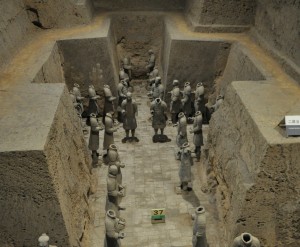 A view of the larger area in Pit 2.

Jill and I continued on our way to Pit 2 and found it to be tiny compared to Pit 3 but much more personal and powerful.

There were many more Terracotta Warriors, and their horses, in this pit and it is was much more excavated than Pit 3, which they believe was the command center.

Pit 3, from what we’ve seen, is one of the newer pits to be excavated and is still quite unexplored at this time.

Pit 2 was much more developed, clean, and we had a very clear view of the statues.  It is full of the cavalry and infantry units.  There were supposedly war chariots here also.  It seems to have represented the military guard.

The horses, by the way, all used to have wagons made out of wood.

It seems that they people either burned them or they rotted with time according to the signs and information around the pit.

We were not able to see any descriptions of what the wagons looked like but I’m guessing they were very ornate and incredibly beautiful.

Speaking of beauty, the terra cotta warriors were originally even more beautiful as they were painted in bright blue, orange and other colors that have faded with time.

There were a few pictures of what they probably looked like and it would have been an incredibly impressive army to see set into the ground.

Not to say that this army wasn’t impressive enough but it would have looked like an army of warriors in rainbow colored armor.

By the way, the warriors were found by some farmers that were trying to dig a well and had been lost to history until that time.

Can you imagine just trying to dig a well and happening across the beginning of this massive army underneath your land?

By the way, Qin Shi Huang was the emperor that had these all built for him before he died at the age of 50.  He united all of China while being the first emperor of China.

Oh, in case you feel a little inferior at this point since this guy did all that, just add to his resume that he was the one that started the Great Wall of China.  And survived over 3 different assassination attempts.