A mosaic of Mary and Jesus.

So, I’m going to keep it short and sweet and let the pictures speak for themselves.

The Hagia Sofia is mind blowing.

There is no other way to describe it.

From the outside is it monumental and awe inspiring.

From the inside it compares to anything I’ve seen in my travels around this Earth.

I’m planning about four days of posts on the Hagia Sofia because there are so many pictures and a video or two.

For starters, the history of this museum is amazing.

It was the focal point of the Eastern Orthodox Church for nearly 1,000 years.

The amazing dome has collapsed at least once and had to be rebuilt.

The other domes have also collapsed.

It has been ransacked and almost totally destroyed through the years but somehow survived.

It had many Christian mosaics on the walls that were then covered by the Muslims who took control of Istanbul.

Luckily, they didn’t destroy the mosaics, but instead, were plastered over and, therefore, saved to be renovated and shown as they are today.

It was a joy, and a wonder, to stand underneath the dome of the Hagia Sophia and just take in the history, the art work, and the power.

The best way to explain it is to click the wikipedia link and then look at my pictures. 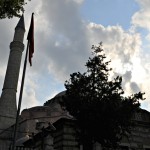 From outside the Hagia Sofia. 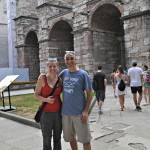 Jill and me in front of the Hagia Sofia. 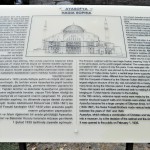 Information on the Hagia Sofia. 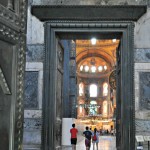 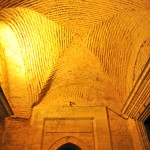 Part of the ceiling. 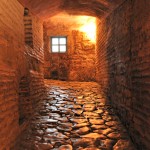 Walking up the ramp to the second level. 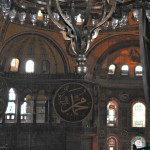 The view from the second level. 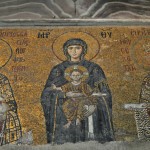 A mosaic of Mary and Jesus. 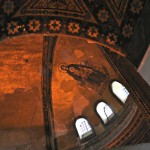 A mosaic on the ceiling. 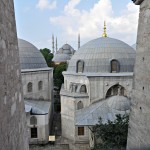 The Blue Mosque in the distance.