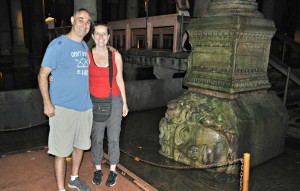 Jill and me by the Medusa.

Jill’s and my last post explained the Basilica Cistern but there is more to the story.

I thought the Medusa heads deserved their own blog post.

They are truly amazing and so out of place.

As you saw yesterday, there are a lot of columns holding up the cistern.

Two of them are very different.

They have two blocks of stone that are carved to look like the Medusa at the bottom of them.

No one is really sure why the Medusa heads are there, and some think that they are laid sideways so that the “glare” of the Medusa one turn to viewer to stone (as is the myth) but it is more likely that it is just simply to make sure it fit in correctly.

If you don’t know the story of the Medusa, it was a Gorgon.  This Gorgon was half-woman/half-snake and had venomous snakes for hair.

The creature was so horrid looking that, just by seeing it, one would be turned to stone.

Don’t worry though, Perseus beheaded her and she can’t hurt anyone now.

You can also see coins, and waves from the condensation dripping down from the ceiling, in the pictures. 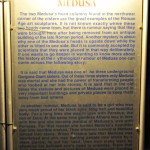 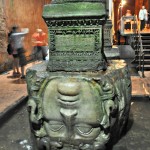 The upside down Medusa. 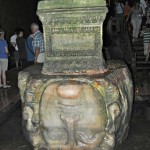 Another shot of it. 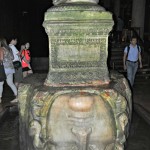 And one more just for good measure. 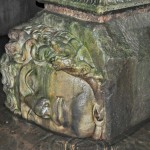 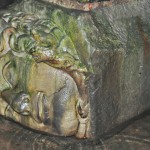 More shots of the second Medusa. 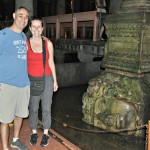 Jill and me by the Medusa.