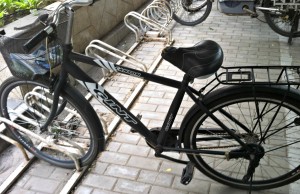 So there is a bike company called Giant.

My friend, Christopher Rubin, used to work at Giant in Los Angeles.  He used to have the coolest bikes around and I always could call him for advice when I had questions relating to cycling and bicycles.

He once told me that many of the Giant bicycles are owned and made in Taiwan, China and a few other countries.

I used to have a few wonderful racing bikes made by Giant and it brings back great memories when I see them being ridden around Beijing.

There are also Chinese made, and owned, replicas of many other nations, and companies, products.   I’m sure you know what I mean regarding replicas.  Wink wink, nudge nudge.

Anyway, I think I just might have found one.  Look closely and check out the name of the bike on its side.  You may have to click on the picture if you are unable to read the letters on it.

Or, maybe, this bike is just in its adolescence so it isn’t quite a Giant yet.  It is only a Gint.