Day 118 in Beijing: HSR and Expatriates. 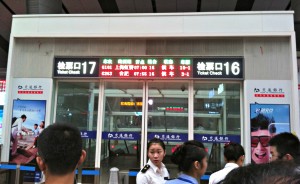 HSR stands for High Speed Rail and it is amazing in China.

The trains are gorgeous, comfortable and quiet.

They run from most major cities in China and are almost always on time.

They are also cheaper than most plane flights and you don’t have to worry about being stuck in the Beijing airport, which has one of the worst on-time records of any airport in the world.  It does have to deal with 73 million passengers a year and it is the second biggest airport in the world. 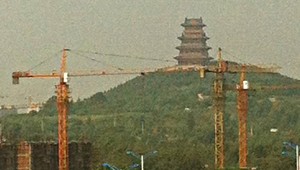 To give you an idea, Jill and I recently went to Shanghai to attend the Salsamemucho salsa dancing festival.

If we had flown, it would have cost about 400-500 dollars American, each for a round-trip ticket.  And the Beijing airport is notorious for flights being delayed or canceled and then there is the 1-2 hour time you have to wait after checking in.  So, a 2 hour flight becomes a 5-6 hour ordeal. 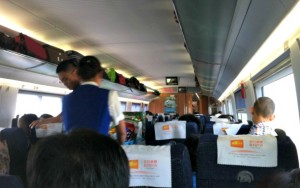 Comfortable, clean and on time. Perfection.

The HSR costs us 555RMB per person, each way.  This comes out to 170 bucks a person, round-trip, so only $340 round-trip.  We’ve already saved enough money to pay for two nights of our hotel room without doing anything except saving time and not having to deal with the Beijing airport.

The check in also saved us time.  We got there about an hour before, hopped in line, and then handed our tickets to the attendant, threw our luggage in the overhead bins, and sat down in our assigned seats.  Twenty minutes later we were picking up speed and watching the speedometer numbers rise up to a maximum of about 305 KPH which is 190 MPH. 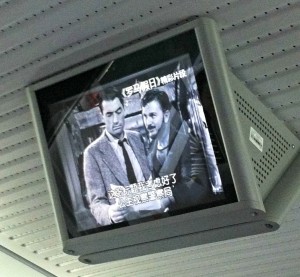 For your viewing pleasure: Roman Holiday with Chinese subtitles.

We didn’t feel a bump, jerk or shudder.  And no turbulence at all.  Another benefit.

By the way, you can bring on your own food, and alcohol, and eat or drink as much as you want.  In fact, Jill and I asked for a bottle opener for our own beers and the train attendants started laughing as we popped ours open and had a drink instead of looking at us with scorn or derision because we didn’t buy it from them.

The trip lasted about 5.5 hours and it also allowed us to the scenery and take some pictures.

I feel the need for speed!

On the return ride home, we ended up one row behind a Italian couple that had been living in Australia for the last 6 years after traveling all over Asia and other parts of the world.  They were head to a wedding in Beijing, and then home to Italy, and then off to who knows where.

We had a great conversation and I have a feeling they are a couple that we will keep in touch with over the years. 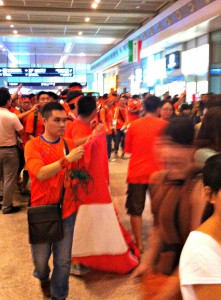 A professional soccer team arrived at the same time we did. We weren’t quite as celebrated as they were. 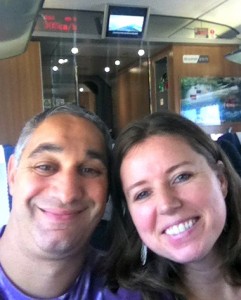 The happy couple on our way to Shanghai!

It is part of the expatriate life that I enjoy so much: Meeting people you would never have met in any other way, and then seeing them again, maybe years later, in another part of the world.  Everyone is transient, to some degree, and having a support system that connects you to the rest of the world, no matter how far away, becomes a second family that can be relied upon in times of need.  And in times of joy.  And in any time in between.