Many people think that Americans run around wielding guns all the time.

The American media definitely spends a lot of time talking about guns, people being shot, how unsafe it is to live in certain areas and other reasons to be terrified of your neighbor or a stranger.

Personally, as far as I know, every gun owner that I know is responsible, has taken classes to learn how to shoot well and is licensed.  They have done their due diligence and take every precaution so that no one around them would be hurt or the guns misused.

I’ve even gone to the shooting range to see what it would be like to fire a pistol or revolver.

Honestly, it is a bit scary as the thing has a heck of a kick and it is very loud.

There weren’t even large caliber.

Simply stated, anyone that can pull one of those things out and hit a moving target has done a lot of practice and training.

It may be obvious to most that own handguns, but I realized, at that moment, that television dramas and movies gun fights and battles are utterly unrealistic.

Please don’t take this as a political statement at all as I’m not advocating for or against guns, I’m just setting the basis for this post.

I tend to trust my fellow human beings and I felt very safe in Malaysia and didn’t worry or even think about guns until I saw this guy walking around in Melaka.

I just thought it was an interesting t-shirt to be wearing around and wondered how the person wearing it would be received in San Francisco, CA compared to Nebraska, OK or Fargo, ND, or Washington, DC.

I continue to wonder. 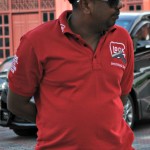 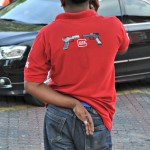 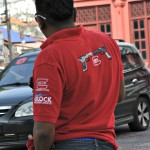 Got the gangsta lean in full effect!