Day 265 in Beijing: Bottling the Beijing Jing A Brew! 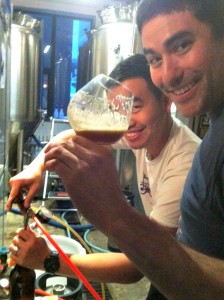 Alex is holding the glass and Kris is doing the bottling.

So, some of the first friends I made when I came to Beijing were the two brewmasters for Jing A Brewery.

Alex and Kris are from the USA and Canada respectively and great guys.  They’ve both been here for quite a while and have made Beijing their homes (as we say with almost all expatriates, “for now”).

They were very friendly, talked openly about their love of craft beer, and welcomed me into their circle of friends quite quickly.

It is something I’ve noticed, especially here in Beijing: People are accepted very quickly because you never know how long they will be here.

It seems that the goodbye parties, of which Jill and I have already been to a few, are fairly constant and get to wear people down sometime.

Being that Jill and I are both very outgoing, friendly, and love meeting new people, we will have to deal with this issue but we are also trying to balance it by having enough friends that we don’t feel as if “everyone we know” is leaving and gone at the same time.

I have to admit that Facebook, Skype and this blog is a big part of keeping grounded and being reminded that we all matter and aren’t forgotten.

My brother, David Sohigian, used to be a brewmaster and actually taught and helped run a brewing school back in the USA so I have a bit of background in the brewing world, although not a lot.

Jill and I went by The Big Smoke, one of our favorite restaurants and hangouts, on Valentine’s Day for a bit of food and drink, and ran into the guys from Jing A.

It was a pleasant surprise and we hung out and watched them bottle their beer.

You might remember I commented, months back, about the Jing A Keg Egg vehicle.

That used to Richard’s “car” and it is now owned by Jing A and so these three guys are now, in my view, The Three Amigos of brewing in Beijing!