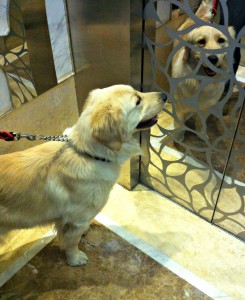 Hey, there’s another dog I can play with right in front of me!

I have to say, I really do love dogs.

I grew up with a bunch of dogs, and a few cats, but dogs were my favorite.  I remember our black lab, Horse, and how wonderful and loving he was for so many years.

He was named Horse because he was a massive black lab and looked like a horse.  We weren’t a very imaginative family, obviously.

He was one of those special dogs that was able to “smile” when he was happy and that seemed to happen a lot.

At this point in my life, I don’t want to have a dog because I enjoy the freedom of being able to get up and go whenever, and wherever, I want at a moment’s notice.

Being that I also do some crisis response work for my company, it is helpful to be able to pack up and not have to worry about feeding an animal or getting someone to take care of it if I have to be gone for a week somewhere.

That being said, I love seeing the dogs around Beijing and petting them or watching them play.

This big guy was in the elevator and he kept looking at himself.

He got really excited when the elevator stopped and he realized, “The door is about to open and I get to run!!!!”

I’ve seen him outside, carrying his leash in his mouth, and he is just the happiest Golden Retriever around.

Then again, I’m pretty sure Golden’s have been bred so that it is almost impossible for them to be depressed or sad.

Now, many of you have heard of China’s “One Child Policy” but have you heard of Beijing’s, “One Dog Policy?” 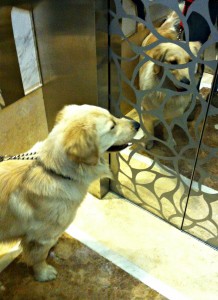 Maybe if stare at the opening of the elevator even more intensely it will open up faster!

Not only does it only allow you to own only one dog (obviously this lady is not following the law) but there is a size limit also.

This occurred because of an outbreak of rabies in 2006.

318 people were killed and the authorities decided to step in and change the rules.

Now, you can only have one dog, and that dog can not be any taller than 14 inches.

I know people that have Afghan hounds and they are much taller than that.

I am guessing that they either pay the $650 dollar fine or the authorities aren’t paying that much attention and it is just a law that can be ignored because it is meant as a deterrent more than an actual penalty.

Either way, I love all the doggies around Beijing and hope you do too!