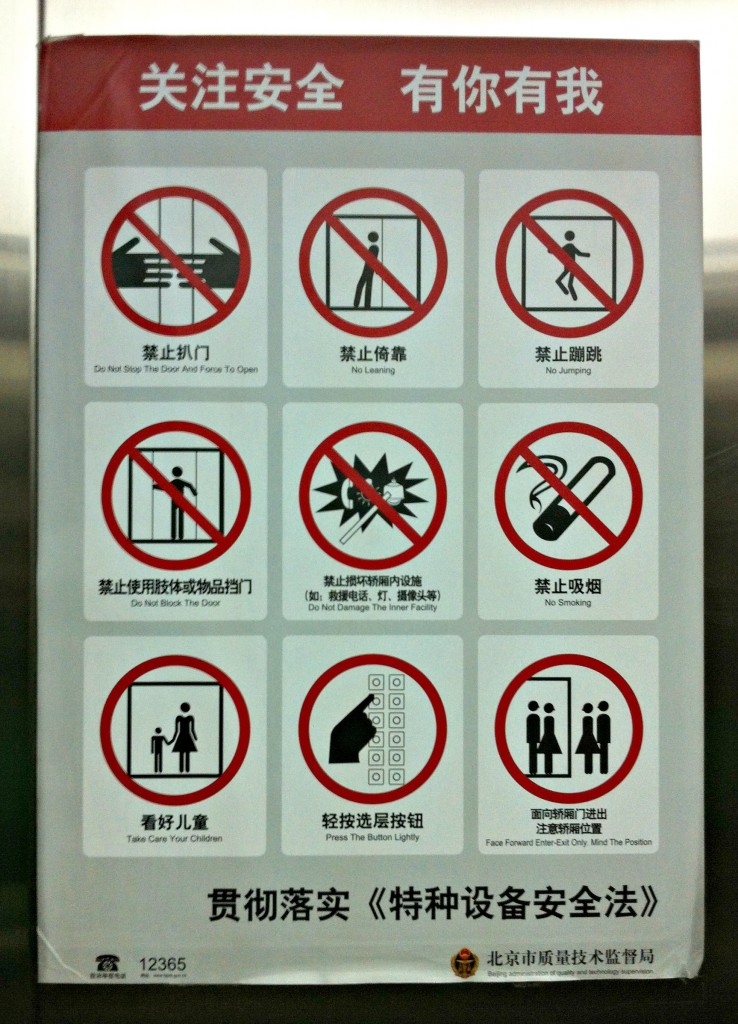 There are a lot of elevators in a city of 23 million people.

There are a lot of rules to keep a city of 23 million people running smoothly.

This is especially true when it is a city like Beijing, which has grown, almost like no other city in history, in size and population.

Many people here don’t know the rules of getting on or off a subway, bus or elevator.

One would think it would be obvious that, to get in to an container, with limited space, that the container would have to be emptied first.

Or, more simply, that if you let the people off the subway, bus or elevator, you could then get in much more easily.

That doesn’t seem to be the rule here in China.

People try to push onto the subways and buses without waiting for people to get off.

It is, from what I’ve been told, much better now than it was in the past, but it is tiring and frustrating.

The powers that be have decided that they want to have a little more directions for people to follow and so there are posts about things like this in different areas.

The subways have little arrows that are supposed to make it obvious that people waiting to get on the subway should stand to the side of the doors and the people getting off the subway will walk between the two rows.

Again, this is getting better but it doesn’t seem to be the norm yet.

This is another reason I try to take taxis more than I take the subway.

I thought this elevator sign had to be one of the most definitive definitions of what one should, and shouldn’t do, when they are on an elevator.

I’ll do my best to explain the directions because I think their interpretations of them are quite boring and mundane.

Starting from the top left and moving sideways until the next line starts:

1. Do not use pretend you are in jail or behind bars.  That will probably happen sometime in your lifetime and why rush the experience?

2. Do not lean against the doors like a hipster from San Francisco or New York.  Everyone hates hipsters.

3. Do not act as if you are in the Sound of Music while riding the elevator.

4. Do not dance like you are a prince or princess living in Egypt’s distant history.

5. Do not bring toilet scrubbers into the elevator and make them explode.

6. Do not smoke.  Honestly, this NEEDS to be stated in an elevator.  Really?

7. Do not hold the hand of an amazon woman.  It is dangerous and could lead to disembowelment.

8. Do not play with anything that looks like a lego block.  This is an elevator, not a plaything!

9. Do not look in the mirror because you will get confused and think you are seeing someone else when you are only looking at yourself.  This may cause an inter-dimensional shift that could rupture humanity’s understanding of the time-space continuum.   I believe that riding this elevator is akin to reading “The Hitchhiker’s Guide to the Galaxy.”

9A.  Either it is that or this elevator is a hook up for couples that like to swing.

Either way, I’m not taking this elevator ever again.