Day 358 in Beijing: Paying Rent One Year At A Time. 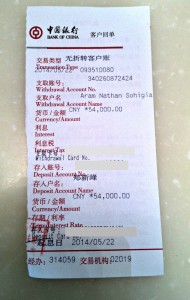 Rent is a whole different subject in China.

You may have a contract, like we had in the USA, but it doesn’t really matter that much.

We’ve heard horror stories of landlords walking into the person’s apartment, letting them know, “By the way, I’m raising the rent next month.  If you don’t like it, move out.”

We’ve had friends that had to argue and verbally fight with their landlord so this didn’t happen.

It seems the best resort is to threaten to move out and leave them with nothing.

The landlords usually back down after that but sometimes not.

It is a hassle and a drag.

The rents here are also not paid monthly.

At least, not the expatriate rents.

We often have to pay 3 months in advance.

The place I’m leaving, which I can not tell you how happy I am leaving it at this point, I had to pay 6 months in advance.

Realize that when I moved to China, I had no idea that rents were any different than in the USA.

I basically used up a large portion of my savings, in the USA, just to pay the rent here and had to deal with the Chinese banking system.  That, alone, is a whole different blog post that won’t be written until I am no longer living here.  Suffice to say, it is usually a horrible experience and when I tried to transfer money over, my worst nightmares came true for about a week or so.

The apartment we are in now, which is a 5 minute walk from my work instead of a 30 minute cab ride, is perfect for Jill and me.

It is small, it is easy to clean, and it is close to the people we care about in China and where we like to hang out.

It is the dream apartment for us.

It is also quite inexpensive and the landlords are amazing.

We know this because we are taking it over from our friend, Sienna, who we met through Gordon Kutil and Sarah Ting-Ting Hou, who are basically our closest friends here in Beijing.

Sienna was nice enough to bargain for us when we were negotiating the rent agreement and we were told that, if we are willing to pay ONE YEAR IN ADVANCE, they wouldn’t raise the rent.

This sounds like a massive amount of money, and it sort of is, but the long term benefits well outweigh the short term money crunch.

We decided we’d do it, since Sienna had lived at her place for over 4 years and told us they were the best landlords she had ever met.  The landlord’s son, Zhang, also spoke perfect English and told us he’d help us out if we need anything.

Usually the wait at the banks here range from 1 to 3 hours and are full of wasted time, annoyance, and “You have the wrong form.  Come back later” comments that drive everyone insane.

I waited about 15 minutes and walked up to the teller when “A1050” was called.

The teller started speaking to me in Mandarin and I called Zhang and handed her the phone.

She spoke to him for a minute and handed me back the phone and said, “So you want to transfer money to Zhang?  Is he someone you can trust?” in perfect English.

I was blown away.  This is the first time this branch has a teller that even speaks English let alone fluently.

I told her, “Yes please, he is my landlord” and she set to work on the paperwork and whatnot.

She took my passport, as expatriates can’t transfer more than 50,000RMB in one day unless they bring their passports, and handed me two forms to sign, which I did, and then it was done.

Zhang sent me a text telling me he had received the money and that he wanted us to keep the receipts and that they will clean the apartment, top to bottom, and it “will be spotless when you move in” on Sunday.

I honestly could not believe how well everything went, how nice everyone was, and that I had just transferred almost 9,000 USD.

This is the kind of crazy experience that makes China a wonderful, and crazy, place every single day.