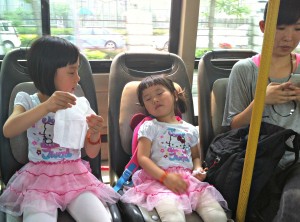 Jill and I were cruising out to her school a few weeks ago and riding the bus.

It takes about 45-50 minutes to get out to her school and it was quite hot.

We were lucky to get a sea and made sure that the elderly people all had seats before we sat down.

We noticed that most people don’t get up for the elderly when they get on the bus.

Sadly, like what I’ve seen in the SF Bay Area, this same thing happens there.

People seem to ignore what is going on around them and stare into their phones.

It is fairly bad in the back home but the people in Beijing seem to spend most their lives plugged into their phones and ignoring what is happening in the outside world.

I can not count how many times Jill and I have been run into by people staring at their phones and not looking where they are going.

Stumbletexting takes on a whole new level here in China.

I’m glad that Jill and I learned to give up our seats and make sure people can sit down.

We get lots and lots of smiles and “Xie xie” from the people when we do and wonder why more here don’t.

I guess it is cultural and it is also that there are 25 million people in Beijing, most of which are not native to the city, and this hasn’t been pushed by the government as something that should be automatic.

I hope that more people start paying attention to the signs, and the elderly, as there is a lot of them here and they have worked incredibly hard during their lives.

These girls, on the other hand, were the cutest things we’ve seen.

They were playing with each other, and then teasing us with the handkerchief, and enjoying the ride.

I think their outfits are super cute and they obviously had a lot of fun.

Their mom was, as you can see, on the phone most of the ride, but was still interacting with them and definitely paying attention.