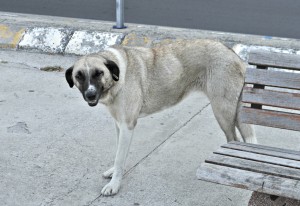 There are a lot of stray dogs in Istanbul.

This was quite a change from Beijing as there are almost no stray dogs in that city.

The laws are very strict about dogs and it is actually illegal to have a dog, over a certain size, in the Beijing city limits.

Of course, if you have enough money, or the right connections, you can easily get around this law and I’ve seen dogs that are well above the height limit walking around downtown Beijing.

The stray dogs in Istanbul are different from stray dogs I’ve seen elsewhere.

They are mostly clean, well fed, and quite friendly.

The only group of unfriendly dogs we met occurred when Jill and I hung out with my second cousin, Nate, and he informed us there was a pack of wild dogs that terrorized the neighborhood every night around 11 pm.

The second time we visited him, we took a cab, and were unfortunate to be dropped off near the pack’s home and they did not like us being anywhere near them.

There were about 10-15 dogs and they look very vicious, mean, and ready to eat us if we happened to walk the wrong way.

We made a hasty retreat and headed for safety.

However, the dog in these pictures is a perfect example of 99% of the dogs we met in Istanbul.

If you notice, he has a blue tag on his ear.

This means he has been spayed and has had his shots.

They Istanbul government was trying to round all the dogs up and move them to “natural habitat” parks a few years ago, but the city’s populace had marches and rallies against it and they backed down.

These dogs, and cats also, are part of the “family” in each district and they seem to be very well accepted and loved.

It is quite cute and nice to have a doggie at your feet when you walk into a cafe and sit down.