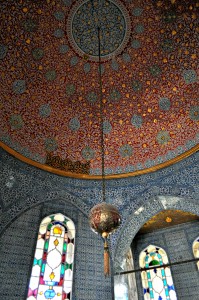 A gorgeously designed room and ceiling.

Jill and I both realized that Turkish, unlike Mandarin, is actually quite easily to learn.

Their written language sounds exactly like it is spelled, unlike Mandarin, and we were able to have minimal conversations with people within a few days.

Nothing more than “hi”, “thank you” and a few other comments but it was definitely easy not to have to try to figure out the tones and indecipherable written language.

The written language there, which is quite similar to the Chinese written language (I’m not going to start an war about who used it first) was much easier, in my mind, because the kanji was the first part of the word and then there were two other written alphabets that let you know the rest of the word.

Being that there were three written alphabets, it would seem much more complicated but it wasn’t.

This is because you only had to learn about 2,000 kanji, and the two other alphabets that were “add ons” and you could know everything.

In Chinese, it seems like there are around 14,000 written characters and that is just way too much.

Especially when they become something totally different as they are lined up and added onto each other.

I just don’t have the time, or energy, to figure it out.

The reason I bring this up is the “i” in Topkapi is actually pronounced like “uh” so it sounds more like “Tope-kap-uh” if it was pronounced correctly.

However, I actually never heard it pronounced that way so I’m guessing, since there are so many tourists that pronounce it, “Topkapi” that the Turks have started to do the same.

I could very easily be wrong, and probably am, and it would be interesting to find out.

It is truly impressive and Jill and I would like to spend more time there the next time we go and just sit and relax.